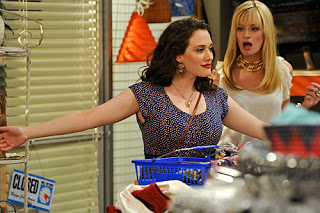 Maybe 2 Broke Girls just isn’t a show for me, you know? (Although judging by the ratings and other reviews, I’m clearly not the only person saying that.) Last night’s episode was, I think, slightly better than the first two. But it’s still pretty damn bad. Now, before I completely give it up (I said I’d watch five episodes, and watch five episodes I will) I’d like to talk about what it’s getting better at and what it needs to fix.

Things 2 Broke Girls has improved on:

This show was supposed to be the superior of the two Whitney Cummings shows premiering this fall. Having seen about ten minutes of Whitney, I’d say that’s probably true. And that Ms. Cummings probably should have stuck to stand-up.