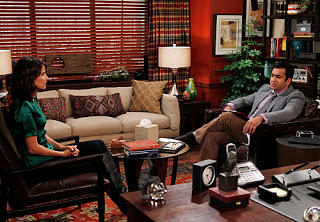 How I Met Your Mother got a little bit meta last night, no? I loved how Robin, telling a story about herself during a court-ordered therapy session, kept returning to what Marshall and Lily were doing and promising her therapist “it all ties together”. It definitely felt self-referential, since HIMYM episodes always include the whole gang, even if the stories don’t quite tie together.

Kal Penn played Robin’s therapist, who she’d been court-ordered to see after assaulting a woman. I’m glad to see Robin getting some major storylines again, even if they are a bit sad, pathetic, and totally centered around her unrequited love for Barney. Robin had to tell the therapist why she’d assaulted a woman, but to do so she had to tell the lengthy tale of how she’d tried to steal Barney back from Nora. Jealousy isn’t a great color on Robin, but she made the most of the material. First she nominated Nora for a business trip (though their boss was going to choose Nora anyway) and then, while Nora was away, she offered to help Barney disable all his “BDS’s” – Bimbo Delivery Systems, designed to deliver hot women right to Barney. They included commercials for free breast reduction consultations and a magic phone that would leave cheesy messages on hot girls’ voicemails. (My favorite play was the gay hairdresser with the straight twin brother – genius!)

As much as Robin tried to convince her therapist that Marshall and Lily’s story tied into hers, it didn’t. Ted, feeling left out, appointed himself the third member of “Team Baby” and voiced his concern when he found out that Lily’s OB-GYN was letting her have “just a leeetle beeet” of all the things that are supposed to be bad for you during pregnancy. Marshall kind of agreed with him, but after the two dudes attended a birthing class together sans Lily they realized that what they needed to do was to be supportive of Lily. The storyline was just OK – kind of cheesy, and I didn’t really believe that after all these years now is when Lily would start demanding some space from Ted. At the very least, though, the storyline continued this season’s trend in making Ted likable again. He was enthusiastic and well-intentioned, and that’s what I always used to like about him.

In the end, Robin admitted that the woman she’d assaulted was one of the bimbos Barney had accidentally sent to McLaren’s. Robin initially sent her to sabotage Barney and Nora’s relationship, but realizing she should just let Barney be happy, she took the bimbo down before any damage was done.

Overall I thought the episode wasn’t as strong as last week’s, but it’s set up some good stuff – I can’t wait for the episode where Lily gives birth. Now, here are some of my favorite quotes and moments from “The Stinson Missile Crisis”:

How I Met Your Mother: Therapeutic
https://haligonia.ca/how-i-met-your-mother-therapeutic-44729/