The 2009 Writer’s Trust Awards have been announced: 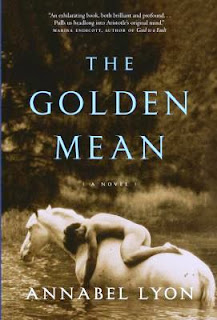 Annabel Lyon is the winner of the 2009 Roger’s Writer’s Trust Fiction award.

“Annabel Lyon’s Aristotle is the most fully-realized historical character in contemporary fiction. The Golden Mean engenders in the reader the same helpless sensitivity to the ferocious beauty of the world that is Aristotle’s disease. In this alarmingly confident and transporting debut novel, Lyon offers us that rarest of treats: a book about philosophy, about the power of ideas, that chortles and sings like an earthy romance.”

The Writer’s Trust Non-Fiction prize was awarded to Brian Brett for Trauma Farm: a rebel history of rural life

“a lively, well-researched blend of memoir and socio-political commentary; a rare celebration of youth, age, and the tumultuous, surprising journey between them.”

“David Bergen is a writer trying to work things out that interest him. When you read what his characters are doing and thinking, you realize the core of a story is never what the story is about. A man and a woman may be trying to sleep with each other in rural Canada but one of them is thinking of a mare being inseminated then whipped with horseshoes in southern Egypt. This image and its residual feeling suggests the larger world within the intimate one David Bergen’s characters are living in as they learn to love and hate and love each other again.

David Bergen is, simply put, one of our best modern writers”

“In her more than twenty books for preschoolers, elementary school children and young adults, Jocelyn demonstrates a rich versatility with genre, medium and style. She has published compelling narratives in a wide range of genres, including young adult realism, historical fiction, biography/memoir, fantasy and picture books. The emotional range of tone in her work is as broad and deep as her exploration of genre: she writes with equal conviction in the voice of satire, comedy and tragedy. Inventiveness, humour, and a sharp understanding of human nature underlie her work for all ages.

She is a visual artist as well as a verbal one, as her numerous picture books show. Her collage art glories in the beauty and grace of the child’s domain, rich in artefacts, objects of play and contemplation. Her subtle use of endpapers and framing, textured materials, fabrics and found objects — her use of real “kid things” — creates a visual world of identity, interest and choice, showing the creative possibilities and thoughtfulness in the child’s world.”