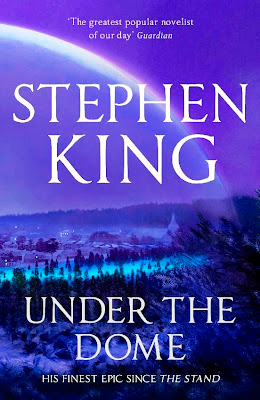 An acquaintance (who shall remain nameless to protect the weak) sustained a bicep injury reading Under the Dome by Stephen King. In one hand he held his mug of coffee (his beverage of choice while reading) and with the other arm he reached for and attempted to pick up this 1074 page tome. Coffee drinkers beware: This book is a two-hander.

The book’s flyleaves are blank. There is no explanation about the book or ringing endorsements on the dust jacket. You have to admire the confidence. It’s Stephen King, just read it. The 1000+ pages cover one week in the life of Chester Mills, Maine. An invisible force field has surrounded the town entirely isolating its inhabitants leaving them to the mercy of a tyrannical politician.

Sometimes I look at these huge books, which require not only a big brain but also well developed muscles, and think that life is just too short. However, in the case of Under the Dome, Publishers’ Weekly describes it as a “nonstop thrill ride”. I can attest that my acquaintance is sailing on through the book, presently at about page 450. 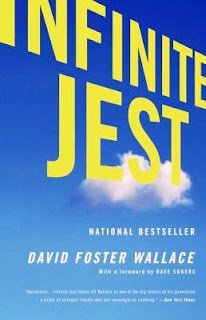 Another brawny read that made waves in recent years is Infinite Jest by David Foster Wallace. Library Journal says this book is “not for the faint-hearted or the weak-wristed”. (See, they understand!) Destined for a cult following, Infinite Jest is a witty social commentary that covers most aspects of American culture. For the truly dedicated you can find a website with instructions about how to read the book and another with page by page annotations. 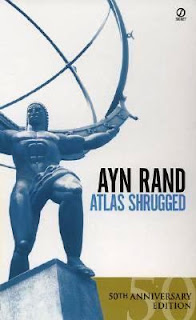 Receiving mostly negative reviews when first published the weighty Atlas Shrugged by Ayn Rand is making a resurgence. Heavy both literally and figuratively at over 1100, Rand explores a dsytopian United States in which its creative and productive citizens disappear. See this page from the Ayn Rand Institute for an explanation, in her own words, of her philosophy of objectivism.

If your attention span is up to the test, how about a classic? Clarissa; Or the History of a Young Lady by Samuel Richardson is over 1500 pages (Penguin edition). It’ s considered to be one of the greatest novels of the 18th century. Clarissa is a tragic heroine who, against her will, is to be married off to a rather unsavory character. She is tricked by the rake Lovelace, who she sees as her protector, and so her downfall begins.

If you enjoy lists (and who amongst us does not!), try LibraryThing’s Really Long Books : 1001 Books to Read Before You Die.