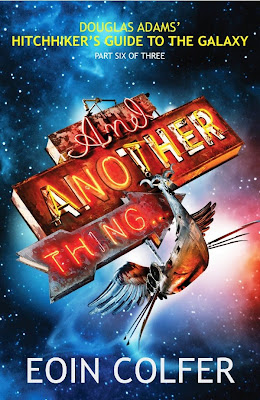 The sixth volume in the Hicthhiker’s Guide to the Galaxy series has been published, even though original author David Adams passed away in 2001.

Douglas Adams’ widow approached Eion Colfer, best known as the author of the Artimis Fowl series, to resurrect the famous trilogy.
The result is And Another Thing… :Douglas Adams’ hitchhiker’s guide to the galaxy, part six of three.
The resulting novel has been very well received.

“The reviews have been mostly positive. The Guardian’s Mark Lawson, for example, admitted that the book has completely eliminated his initial skepticism about the venture. “Colfer has achieved the best post-mortem impersonation I have ever read,” Lawson wrote in his column. “If Adams’s family had chosen to tout this manuscript as an original novel discovered in a cupboard, their subterfuge would have been hard to rumble.”

Flattering words – and yet Colfer says an impersonation was the last thing he intended: “Inevitably, there’s a touch of Douglas about the book,” he says, “but I’m not him. He developed a whole new way of writing – satirical, long-winded, with these labyrinthine sentences – and it’s usually a dismal failure if you try to imitate this. So yes, I put a bit of Doug’s voice in there to show that I was fond of him, but really just did my own thing.

“With the franchise rebooted, I’m looking forward to a sequel. To sum it up in one word: froody.“
Curtis Silver, Wired.com