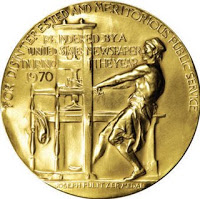 For the first time since 1977*, there will be no Pulitzer Prize for Fiction awarded. The judges for the fiction category of the Pulitzer Prize could not agree on a winner. The final 2012 short list consisted of three titles, neither of which could garnish a majority of support from the judges.
Here are the three finalists
Train Dreams (M)
by Denis Johnson

“National Book Award-winner Johnson, ever the literary shape-shifter, looks back to America’s expansionist fever dream in a haunting frontier ballad about a loner named Robert Grainier. Left in the dark about why he was put on a train by himself as a young boy and sent cross-country to relatives in Idaho, Grainier revels in the hard, dangerous work and steadying loneliness of logging mighty forests and building gravity-defying and spirit-testing railroad bridges over plunging gorges. He finally marries, only to return to the massive undertakings he hungers for, leaving his wife and baby girl in their isolated cabin. After hearing about and witnessing myriad crimes and catastrophes embodying the sublime and the macabre, Grainier is blasted into his own private hell of horror and grief. By the time he emerges, cars and planes have further transformed the world.
Johnson draws on history and tall tales to adroitly infuse one contemplative man’s solitary life with the boundless mysteries of nature and the havoc of humankind’s breakneck technological insurgency, creating a concentrated, reverberating tale of ravishing solemnity and molten lyricism.” – Booklist

“*Starred Review* Russell’s lavishly imagined and spectacularly crafted first novel sprang from a story in her highly praised collection, St. Lucy’s Home for Girls Raised by Wolves (2006). Swamplandia! is a shabby tourist attraction deep in the Everglades, owned by the Bigtree clan of alligator wrestlers. When Hilola, their star performer, dies, her husband and children lose their moorings, and Swamplandia! itself is endangered as audiences dwindle. The Chief leaves. Brother Kiwi, 17, sneaks off to work at the World of Darkness, a new mainland amusement park featuring the rings of hell. Otherworldly sister Osceola, 16, vanishes after falling in love with the ghost of a young man who died while working for the ill-fated Dredge and Fill Campaign in the 1930s. It’s up to Ava, 13, to find her sister, and her odyssey to the Underworld is mythic, spellbinding, and terrifying.
Russell’s powers reside in her profound knowledge of the great imperiled swamp, from its alligators and insects, floating orchids and invasive strangler melaleuca trees to the tragic history of its massacred indigenous people and wildlife. Ravishing, elegiac, funny, and brilliantly inquisitive, Russell’s archetypal swamp saga tells a mystical yet rooted tale of three innocents who come of age through trials of water, fire, and air” – Booklist
The Pale King (M)
by David Foster Wallace

“*Starred Review* The overture to Wallace’s unfinished last novel is a rhapsodic evocation of the subtle vibrancy of the midwestern landscape, a flat, wind-scoured place of potentially numbing sameness that is, instead, rife with complex drama. The Pale King is a feverishly encompassing, sharply comedic, and haunting work painstakingly assembled out of pieces rough and polished by Wallace’s longtime editor, Michael Pietsch. Inevitably Wallace’s long struggle with depression and 2008 suicide frame this churning tale of afflicted misfits who are drawn by some peculiar cosmic force to grimly regimented jobs at an Internal Revenue Service center in Peoria, Illinois. Yet this is not a novel of defeat but, rather, of oddly heroic persistence…
… In the spirit of Borges, Gaddis, and Terry Gilliam’s Brazil (1985), Wallace conducts a commanding and ingenious inquiry into monumental boredom, sorrow, the deception of appearances, and the redeeming if elusive truth that any endeavor, however tedious, however impossible, can become a conduit to enlightenment, or at least a way station in a world where everything is on fire, slow fire.” Booklist

* In 1977, the judges actually selected A River Runs Through It (M), by Norman MacLean. For some reason, the Pulitzer board decided not to give an award.