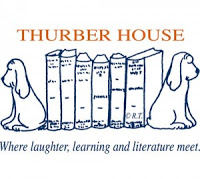 Need a laugh? The finalists for the 2013 Thurber Prize have been announced. The Thurber prize, in honour of James Thurber (The Secret Lives of Walter Mitty)  is awarded annually and recognizes the best in American humour writing.

This year’s finalists are:

“The rural town of Stockton, New York, is famous for nothing: no one was born there, no one died there, nothing of any historical import at all has ever happened there, which is why Solomon Kugel, like other urbanites fleeing their pasts and histories, decided to move his wife and young son there. To begin again. To start anew. But it isn’t quite working out that way for Kugel… His ailing mother stubbornly holds on to life, and won’t stop reminiscing about the Nazi concentration camps she never actually suffered through. To complicate matters further, some lunatic is burning down farmhouses just like the one Kugel bought, and when, one night, he discovers history—a living, breathing, thought-to-be-dead specimen of history—hiding upstairs in his attic, bad quickly becomes worse. Hope: A Tragedy is a hilarious and haunting examination of the burdens and abuse of history, propelled with unstoppable rhythm and filled with existential musings and mordant wit. It is a comic and compelling story of the hopeless longing to be free of those pasts that haunt our every present.” publisher

Dave Barry and Alan Zweibel for Lunatics: a novel (M)

“Philip Horkman is a happy man, the owner of a pet store called The Wine Shop, and on Sundays a referee for a local kids’ soccer league. Jeffrey Peckerman is the proud and loving father of a star athlete in the girls’ ten-and-under soccer league, and he’s not exactly happy with the ref. The two of them are about to collide in a swiftly escalating series of events that will send them running for their lives, pursued by the police, soldiers, subversives, bears, revolutionaries, pirates, and a black ops team that does not exist. Where all that takes them you can’t even begin to guess, but the literary journey there is a masterpiece of inspiration, chaos, and unadulterated, well, lunacy. And they might even learn a lesson or two along the way.” publisher

Dan Zevin for Dan Gets a Minivan: life at the intersection of dude and dad (M)

“The least hip citizen of Brooklyn, Dan Zevin has a working wife, two small children, a mother who visits each week to “help,” and an obese Labrador mutt who prefers to be driven rather than walked. How he got to this point is a bit of a blur. There was a wedding, and then there was a puppy. A home was purchased in New England. A wife was promoted and transferred to New York. A town house. A new baby boy. A new baby girl. A full-time dad was born. A prescription for Xanax was filled. Gray hairs appeared; gray hairs fell out. Six years passed in six seconds. And then came the minivan” publisher