Celebrating the best in Canadian science fiction writing with the 2015 Aurora Awards! 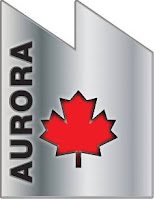 For 35 years the Aurora awards have been given out for Canadian literary and fan works that members of the Canadian Science Fiction and Fantasy Association (CSFFA) feel are exceptional.

A Play of Shadow by Julie Czerneda

“What would you risk for family? In the second installment of Night’s Edge, Bannan Larmensu, the truthseer who won Jenn Nalynn’s heart, learns his brother-in-law was sent as a peace envoy to Channen, capitol of the mysterious domain of Mellynne, and has disappeared. When Bannan’s young nephews arrive in Marrowdell, he fears the worst, that his sister, the fiery Lila, has gone in search of her husband, leaving her sons in his care. The law forbids Bannan from leaving Marrowdell and travelling to Mellynne to help his sister. In this world. As a turn-born, Jenn Nalynn has the power to cross into the magical realm of the Verge, and take Bannan with her. Once there, they could find a way into Mellynne. If they survive. The Verge is wild and deadly, alive with strange magic. Dragons roar and kruar wait in ambush, and the powerful turn-born who care for their world do not care for Jenn Nalynn. She’s willing to try. Wisp and Scourge — and the house toads — offer their help. But what none of them know is that magic is rife in Channen, magic that flows from the Verge itself. And not even a turn-born will be safe there.” publisher

Out of this World by Charles de Lint

“At the end of Over My Head , Josh has propelled himself into the Otherworld where he believes his former girlfriend Elzie is in imminent danger. He leaves behind his closest friends: Marina, whose fledgling romance with Theo is increasingly complicated by her undeniable feelings for Josh, and Des, who is trying to figure out his own role amongst his Wildling friends. In this unpredictable world a side-step from our own, Josh discovers more about the awesome power he holds within, as he deals with hostility from certain animal clans and elders. Back in Santa Feliz his friends are facing a huge anti-Wildling rally that threatens all Wildling teens with segregation and incarceration. In the most tense and perilous of circumstances in both worlds, Josh and his friends must rely on each other’s love, ingenuity and loyalty to survive.” publisher

“When seventeen-year-old Toby McGonigal finds himself lost in space, separated from his family, he expects his next drift into cold sleep to be his last. After all, the planet he’s orbiting is frozen and sunless, and the cities are dead. But when Toby wakes again, he’s surprised to discover a thriving planet, a strange and prosperous galaxy, and something stranger still—that he’s been asleep for 14,000 years. Welcome to the Lockstep Empire, where civilization is kept alive by careful hibernation. Here cold sleeps can last decades and waking moments mere weeks. Its citizens survive for millennia, traveling asleep on long voyages between worlds. Not only is Lockstep the new center of the galaxy, but Toby is shocked to learn that the Empire is still ruled by its founding family: his own. Toby’s brother Peter has become a terrible tyrant. Suspicious of the return of his long-lost brother, whose rightful inheritance also controls the lockstep hibernation cycles, Peter sees Toby as a threat to his regime. Now, with the help of a lockstep girl named Corva, Toby must survive the forces of this new Empire, outwit his siblings, and save human civilization. Karl Schroeder’s Lockstep is a grand innovation in hard Science Fiction space opera.” publisher