Need a laugh? The nominees the 2015 Thurber Prize have been announced. The Thurber prize, in honour of James Thurber (The Secret Lives of Walter Mitty) is awarded annually and recognizes the best in American humour writing.

This year’s finalists are:

Can’t We Talk About Something More Pleasant? by Roz Chast 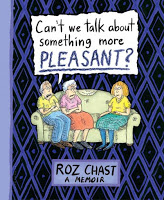 “In her first memoir, Roz Chast brings her signature wit to the topic of aging parents. Spanning the last several years of their lives and told through four-color cartoons, family photos, and documents, and a narrative as rife with laughs as it is with tears, Chast’s memoir is both comfort and comic relief for anyone experiencing the life-altering loss of elderly parents. When it came to her elderly mother and father, Roz held to the practices of denial, avoidance, and distraction. But when Elizabeth Chast climbed a ladder to locate an old souvenir from the ‘crazy closet’–with predictable results–the tools that had served Roz well through her parents’ seventies, eighties, and into their early nineties could no longer be deployed.”  publisher.

I See You Made an Effort by Annabelle Gurwitch

“Actress and humorist Annabelle Gurwitch returns with I See You Made an Effort, a book of essays so wickedly funny it may make you forget your last birthday. Not one to shy away from the grisly realities of middle age, the “slyly subversive” (O, The Oprah Magazine) Gurwitch confronts the various indignities faced by femmes d’un certain age with candor, wit, and a healthy dose of hilarious self-deprecation. Whether falling in lust at the Genius bar, navigating the extensive—and treacherously expensive—anti aging offerings at a department-store beauty counter, coping with the assisted suicide of her best friend, negotiating the ins and outs of acceptable behavior with her teenage kid, or the thudding financial reality of the “never-tirement” generation that leads her to petty theft, Gurwitch’s essays prove her a remarkably astute writer in her prime (in so many ways).” publisher

” Jason Fitger is a beleaguered professor of creative writing and literature at Payne University, a small and not very distinguished liberal arts college in the Midwest … His once-promising writing career is in the doldrums, as is his romantic life, in part as the result of his unwise use of his private affairs for his novels … In short, his life is a tale of woe, and the vehicle this … novel uses to tell that tale is a series of … letters of recommendation that Fitger is endlessly called upon by his students and colleagues to produce, each one of which is a small masterpiece of high dudgeon, low spirits, and passive-aggressive strategies.” publisher.