Friday.
The international foodie weekend begun on Friday morning as I arrived at work. On my desk was a conspicuous looking baggie with a dried, green plant-like substance inside. It isn’t what you’re thinking! (Naughty!) It was a

zip-loc bag of yerba mate tea from Uruguay, brought in by a co-worker who had recently been there for work.

I had tried yerba maté for the first time while living in Seoul. In the foreign district, Itaewon, there was a little Paraguayan empanada shop that had some on their menu. I asked for it because I had never heard of it, and I always have fun ordering something completely mysterious to me on a menu. Truthfully, I thought it tasted terrible, but after hearing several other people RAVE about it (namely, Maria, a wonderful friend in Argentina who I might soon get to visit!), I figured I needed to give it another try. When said co-worker mentioned he had some on Thursday, I nearly fell out of my chair (quite literally), out of interest! Thus, Friday began, sharing some of the potent, grassy tea, out of a bonafide, decorated coconut shell on the edge of Pier 9. It was much better this time around – much more fresh – and I definitely started to see the appeal. An interesting start to the day, for sure!
Sidenote: When I got home Friday night, I discovered that F. had made a new investment! They’re not the original, German knives. These ones come from China, but are still endorsed by Henckels. An exciting accomplice for future adventures in the kitchen! 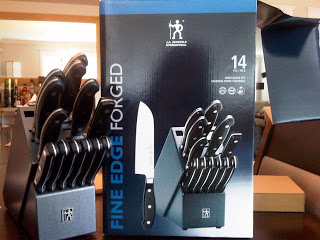 After this discovery, F. and I went out for all-you-can eat sushi, to let someone else experiment with sharp knives, I suppose. We went to a great spot in Bayers Lake called Happy Sushi. The interior is really cozy (I’m told it used to be a wine/spirits store) and the sushi was very tasty. F. has been here many times and says it’s hit or miss, but on this particular night, it was definitely hit! I’ve had my fair share of sushi, and I’m told that this is not uncommon, but I had never before had sushi rolls with little bits of tempura batter in the center – at least that’s what we surmised it to be! It was a great touch. The texture and the crunch really added something delicious to what were already already delicious, fresh sushi rolls.

We had Happy Sushi’s strawberry and green tea ice cream for dessert, but since we had already snagged these from Susie’s Shortbreads before dinner, we may or may not have indulged in secondsies: 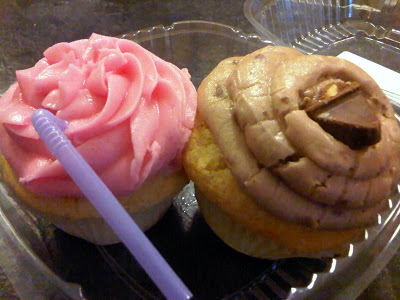 —
Saturday.
On Saturday night, my friend Carla (the same friend who accompanied me to Morris East in a previous post) came over to make a Peruvian dish with me. It was one of her favourite dishes as a child, so she had been wanting to learn how to make it for a while. Prior to arriving on Saturday, Carla had taken notes from her mother, her grandmother AND her aunt, so I knew I was in for a real treat. Carla did the lion’s share of the work, while I occasionally chopped, stirred, or took photos. The recipe was quite time-consuming and definitely needed two sets of hands in the kitchen (unless you’re a real pro!). I’m going to blog about it in greater detail later when I have a more complete recipe to go on, because this is comfort food at its finest, friends, and you’re going to want to try it! For now, here was our finished product, called Aji de Pollo.
—
Sunday.
Oh, Sunday. Have I ever mentioned how much I love Sundays? I saved my weekend trip to the Halifax Seaport Farmers’ Market for Sunday this weekend, because a little birdie (otherwise known as Twitter) told me that someone would be making Cambodian food today.
I had the great pleasure of spending eight days in Cambodia in 2009. Eight days is a heartbreakingly short period of time, but it was all the vacation I had from my teaching job in South Korea. I was there long enough for the country and the wonderful people I met there to leave a big, soft spot in my heart (cheesy, but true), the knowledge that I would definitely go back someday (for longer), and to learn that Cambodian food is… is… just, gorgeous. Overwhelmingly so. After leaving Cambodia, I looked everywhere for Cambodian restaurants, but was sorely disappointed to find out that the country was heavily under-represented in the restaurant scene in any city I’ve lived in or visited since. You can imagine my excitement, then, when I learned it would be served in Halifax this weekend.
Much of the Cambodian food I tried was delicate and filled with the soothing flavours of coconut and lemongrass. Cambodian curries, for example, are much more savoury than the spicy Thai curries found next-door. Saronn is the lovely lady who completely made my Sunday by serving her lip-smackingly good yellow curry and rice. She and her Happy Kitchen will be at the market every Sunday from now on (get there before noon if you want some!), though she is trying to secure a spot at the Saturday market, too. Keep your fingers crossed for her! 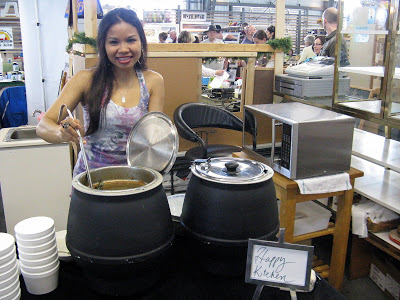 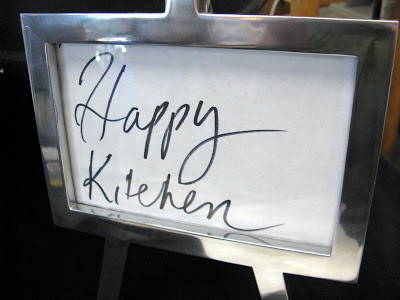 On my way out of the market, I scored some fresh, Valley apple cider and strawberries. They made my car smell wonderful on the way home! Another delicious weekend for the books.