What a weekend! Tasty as all heck.
What began as a Friday Feast ended up being an entire weekend of dining-in and over-indulging. Fine by me! Isn’t that what summer (or the lead into it) is all about?

Friday: Lobster
I left work on Friday armed with research, recipes, and one pre-dinner errand to run. Of all the food experimentation I have done over the past several years, I’m ashamed to say I’ve had relatively little experience with lobster: in cooking or eating it. So when F. suggested we cook lobster for one of his best friends and her boyfriend, I was excited, but equally intimidated. I wasn’t even the one cooking the lobster – F.’s forté – but I was unsure of what to make for sides. Everything I had read online suggested keeping the sides simple, since the lobster really is the main event and requires so much of your attention that sides often go cold. I couldn’t sit back and make a small contribution, however, so I opted to start with some baked goat’s cheese and olives, with baked asparagus, sautéed sugar peas, and spring potatoes as the side.
The recipe I used called for boiling the potatoes first, before putting them in a pan with butter, green onion, the peas, and chopped, fresh mint. I only used half the mint that was called for, but I was surprised by how much I liked the flavour, and how nicely it set off the seafood and lemon flavours elsewhere in the meal. My timing was a bit off with F.’s lobster-boiling, however, so while the flavours were there, I was a little disappointed with my presentation: The veggies were left in slightly too long, so the greens lost their vibrant colour and looked a bit wilted in the dish. The lobster, however, was tender and cooked to perfection. Freddie wins this round!

Here are some snaps of our spread: 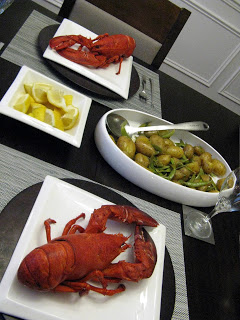 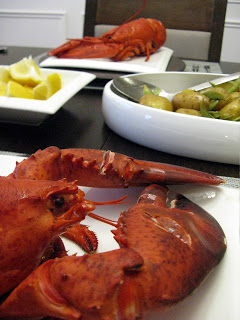 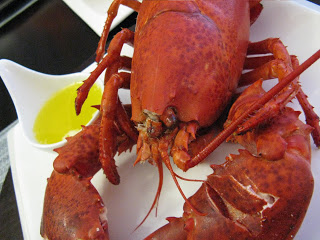 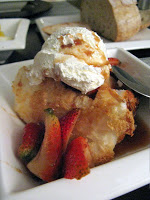 We finished up by cleaning off our buttery plates with some fresh sourdough bread from Julien’s Bakery, and then some strawberry shortcake (with a brown sugar twist) for dessert. This meal was accompanied by a variety of Rieslings and Riesling blends. Each step of the way.
Ahem.
Lesson learned, however. Everything I read about keeping the sides simple seems to be true. Next time I’ll be a better-prepared sous chef.

I was feeling surprisingly ambitious on Saturday morning, given the previous evening’s festivities, so I rolled out of bed and headed to the Halifax Seaport Market for some much needed breakfast and caffeine. One of my favourite stops here is the Crêperie Mobile for their mozza, tomato and basil crêpe. Bursting with fresh flavour, I find them to be the perfect way to wake up. Along with copious amounts of coffee, of course. 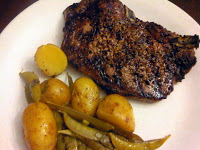 Saturday night ended by throwing a couple of steaks on the grill and eating up leftover veggies from the night before. F. keeps it fresh and simple with steak, and that’s exactly how I like it. They’re well seasoned and grilled to medium, at most. The outside is slightly charred and spicy, the inside pink and juicy. Glorious!
Sunday Brunch: Bacon Cups
A couple of weeks ago, my friend Chad – a notorious meat lover/promoter – posted a link from the Republic of Bacon’s website and a recipe they had for some intriguing-sounding Bacon Cups. I took a quick look, was immediately sold, and vowed to make these bad boys as soon as possible. Life being life, I was only able to get around to making them yesterday, aided and abetted by the gorgeous natural, organic, no additives, hormones, antibiotics (etc., etc.) bacon I had picked up the day before at the market, from Windy View Farm in the Annapolis Valley.
This recipe is a piece of cake and took under 20 minutes to make, including baking time. The Republic of Bacon’s recipe is foolproof and ridiculously easy to follow, but I will say that if you don’t like your eggs runny, you will need to bake them about 5 minutes longer than the recipe calls for. Also, I substituted the gruyere with sharp, aged cheddar. Mine didn’t turn out quite as perfectly as theirs did, but here is a condensed play-by-play of my first go at these breakfast beauties: 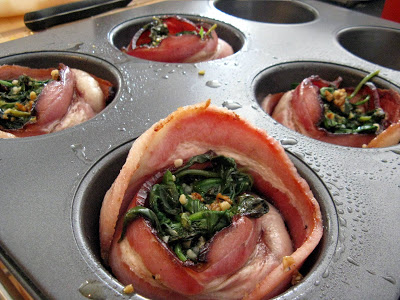 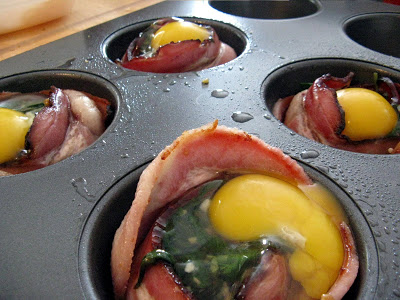 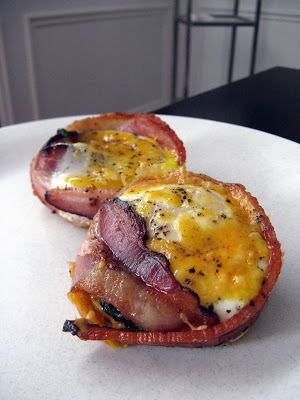 0 0
Pretty, no? Feeling vindicated for my mediocre sides on Friday, I now have big plans for these Bacon Cups and me this summer. They will definitely be making a re-appearance! All told, a hugely successful and delicious weekend. Now to find more time for the gym…
What’s your favourite brunch recipe? I’d love to hear your ideas!