In the spirit of Labour Day, i.e. to celebrate the recognition of worker’s rights, I am highlighting three novels with a theme of trade unions and the labour movement.

“Great Britain. 1984. The miners’ strike. The government against the people. On initial publication, twenty years on from the strike, David Peace’s bravura novel GB84 was hugely acclaimed. In a bloody and dramatic fictional portrait of the year that was to leave an indelible mark on the nation’s consciousness, Peace dares to engage with Britain’s social and political past, bringing it shockingly and brilliantly to life.” – publisher

“Peace, a tremendously amiable Yorkshireman named last year [2003] as one of Granta’s 30 Best of Young British writers, has a style instantly recognisable to fans of James Ellroy and John Dos Passos. He builds a perfect sense of time and place by interspersing his narrative with diaries, newspaper reports, dreams, grocery lists.” – The Observer (UK)

“Zola’s masterpiece of working life, Germinal(1885), exposes the inhuman conditions of miners in northern France in the 1860s. By Zola’s death in 1902 it had come to symbolize the call for freedom from oppression so forcefully that the crowd which gathered at his State funeral chanted “Germinal! Germinal!”

While it is a dramatic novel of working life and everyday relationships, Germinal is also a complex novel of ideas, given fresh vigor and power in this new translation. It is also the thirteenth book in the Rougon-Macquart cycle, which celebrates its centenary in October 1993 with a new film version of Germinal starring Gerard Depardieu.” – publisher 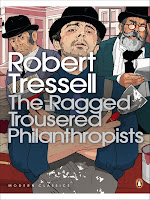 “Originally published in 1914, The Ragged Trousered Philanthropists is a timeless story of Socialism, political awakenings and class struggle, told with a volatile mix of heartfelt rage and sly humour. The Ragged Trousered Philanthropists tells the story of a group of working men who are joined one day by Owen, a journeyman-prophet with a vision of a just society. Owen’s spirited attacks on the greed and dishonesty of the capitalist system rouse his fellow men from their political quietism.

It is both a masterpiece of wit and political passion and one of the most authentic novels of English working class life ever written.” – publisher