If you live in Halifax, or Nova Scotia for that matter, you know all about rain. One of the things I have noticed since moving from Ontario, is how long spring seems to last.

Where I grew up, there was about a week of spring before the heat of summer made an appearance.

Not here. Rain can make it hard for parents of young children when the outside world is all they really want to see.

As a dad, it forces me to get creative and think outside of the toy box so to speak.

To help out all the parents out there who have kids with a major case of cabin fever, here are three ways I entertain my two boys when it is raining cats and dogs. 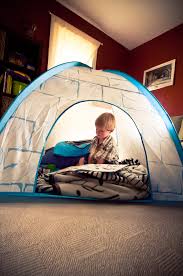 Bring camping indoors. Last week on one of the more rainy days, my 3-year old son for the 5,000th time asked when we were going to set up his new tent in the back yard. Now, you can only explain this to a little one so many times. They just don’t get the logic. So, instead of feeling like I was letting him down (thanks Mother Nature), I just said, okay, let’s set up your tent in the living room and have a camping day. It was a blast. My boys spent the whole day in there. Having snacks, a picnic lunch, reading books and laying on pillows. They even watched a movie on my computer screen while sitting in the tent. Was it as good as being outside? No. But for one day I had them forgetting the rain. Get crafty. Now this is not a new idea. But with computers, tablets, smart phones and TVs , we tend to forget how much kids love to get craft. Whether it is painting, colouring, making noodle statues or turning boxes into cars. One thing our son loves is to decorate his walls. I save old magazines and every now and then, we go through and cut out pictures to stick on the wall. One rainy day we made a car collage on the wall and it was a lot of fun. Before I knew it, the kids were less bummed out about the weather and more into what picture would go where. 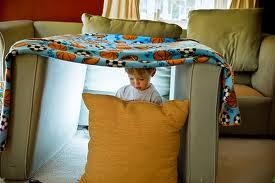 Fort up. Yep, we have all seen it or even done it, but there is nothing like building a fort in the house. This could be with couch cushions, boxes or other creative ideas. For us, we are lucky to have a bunk bed to work with. So we turn the lower bed into a fort with a blanket. The bunk bed has also been a boat and a treehouse (upper bunk). When you get creative, the options are limitless. The best part I find, is that the more crazy you get with your ideas, the more your kids love it. At least our boys do. My favourite was when the top bunk was a Pirate Ship and the blue carpet was the ocean. No matter the set up, a fort is a great way to beat a rainy day.

What have you done with your kids to fight off the rainy day blues?

Michael is a marketing manager by day, who has been at the blogging thing for almost a decade. Father of two, husband to one and griller to the Gods. Read more about his parental adventures, including his current stint on parental leave on his blog, Like A Dad.