My folks bought a massive RV earlier this year. It’s an idea that has been percolating for some time. I remember when I was a kid myself my father voicing a desire to own a cottage or camper.

It has taken some time but here we are now.

The RV Park officially opened up this weekend and apparently eager to make up for lost time the camper was delivered Thursday afternoon. My folks went down on that Thursday to set up, and we joined them Sunday evening.

So far I have to say that going to a seasonal RV Park is like entering into a whole new world. People are all out-and-about, they are speaking with their neighbours, heck they are even going out of their way to introduce themselves to new people like us. But the strangest thing of all is the children, they all seem to be rather free range. To be clear, I don’t mean just the older children, those teetering on the teenage years. I mean pretty much all of the children.

On Sunday night I walked with my kids to the park only to discover it fully populated with 4 and 6 year olds but completely devoid of parents. Monday brought more of the same. We walked down to the bounce pad only to discover that the children were there in full force but the adults were nowhere to be found.

All kidding aside I am realizing rather quickly that my job here is going to be to a) make sure my kids know how to get to and from the playgrounds by themselves b) know how to assert themselves if they don’t like how kids are playing with them c) have some ability to know the time of day to come back for meals.

Actually as I reflect on these necessary skills for the RV Park I am wondering if I have been more of a helicopter parent than I realized.

Up until now wherever my children have gone we have brought them. Most times we were there on the sidelines watching in case they needed us to jump in. And we’re have even selected all their friends for them from the pool of our friends. In short we have had pretty much total control of their play up until now.

But that isn’t going to fly here, like me my kids have already noticed that most children here roam free of their parents. Maybe this is a good thing. My kids are getting older. I have always been impressed with their abilities to handle themselves under my watchful eye. Maybe it is time for my parenting to grow up some as well.

Then again as I sit here on the sidelines of the park writing about how much wiser and more mature my children have become over these past few months a girl just told me that my kids are eating rocks. Perhaps I am getting a little ahead of myself. Or maybe I will add an item ‘D’ to our list of things to make sure the children know; a) Know how to travel to and from the camper b) know how to be assertive when needed c) Know to come back for meals and d) Don’t eat the rocks.

This should be a fun summer. 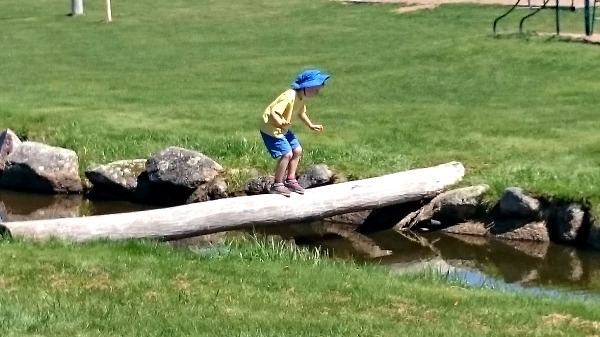 Christopher Drew is the pastor at Sackville Baptist Church. He is the father for three and the husband of one. He is a self professed geek and gamer. Read more about family, faith, and geekery at http://ModernManOfTheCloth.com