My 15-month old son has learned this new thing. He looks up at me and keeps pointing to the palm of his other hand and I’ve learned that this means “more”.

“More” in the sense that if he finishes a piece of watermelon and he wants another piece, that’s when he motions for “more” if he’s still hungry. I don’t know exactly where he learned this gesture, it could have been at daycare or he came up with it on his own, but either way, it’s another sign that my baby is growing up.

Although my son has always had his ways of communicating with us (e.g., crying), this was difficult to decipher, complicated by the fact that our son was a colicky baby who cried….a lot. I’ve heard of parents being able to tell the difference between a hungry cry or a tired cry early on, well this was never really the case for us. Now that he’s a fifteen month old who understands so much of what we say, says a few words, shakes his head ‘yes’ and ‘no’, runs up to me for hugs, laughs and has a couple of gestures, this whole communication thing is becoming less of a guessing game.

This is a whole new stage of my parenting career. My son can now tell me what he likes and dislikes all with a shake of his head. And he clearly knows the difference between “Yes” and “No” especially when it comes to specific vegetables or at naptime, which are normally emphatic “No’s” most of the time. It goes to show that he’s continuing to develop and he’s finding new ways to communicate with us everyday. 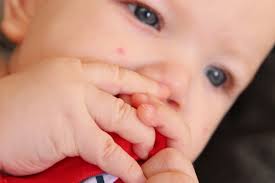 He’s still not much of a talker but his vocabulary has definitely grown with words like Mama, Dada, Banana, Ball, Duck and “Shhhh” which normally means shoes…or fish, depends on what we’re looking at. With the combination of words, hand gestures and facial expressions, I can now get a sense of his wants and needs. It’s interesting since I get to know his thoughts and feelings now, and he’s become another person in our household who has an opinion. I guess this is the precursor to the Terrible Twos and I can only imagine how that stage will go.

But before we get to the Terrible Twos, the challenge at this stage becomes letting him know that he can’t always have “more” watermelon every time he motions for it and can’t always get out of naptime by shaking his head “No”.

As a rookie dad, I have been teaching my son how to communicate with me but at the same time, I’m also learning from him. This is when I become the student and I have to figure out a way to get my point across back to him in a way that he can understand. He’s now teaching me his toddler language and together we’ll begin to understand each other more and more each day.

And the way that we communicate will continue to evolve as he grows up. I flash forward in my head to that time when he’s a teenager yelling at me because he can’t go to a party or when our only method of communication is via texting (or whatever the latest technology is at that time). Until then, I’ll enjoy watching him continue with his toddler communication, coming up with new ways to talk to his parents.

Romy is a first-time dad, husband and blogger based out of Halifax. For more dirty diaper stories, check out his Dad blog, Dad Don’t Lie and follow him on Twitter @DadDontLie