I sometimes feel like I’m surrounded by those who want to celebrate the status quo. It is ironic that in a society where we are constantly looking for new ways to innovate, we see so much unwillingness to embrace change.

But, I suppose that is human nature.

Or perhaps “human” isn’t the right term. “Human” implies that it includes all people. I would imagine that there are distinct segments of our humanity that want change – who notice the need for change – more than others.

This past weekend I attended a local political convention. I have been finding ways to involve myself and network since Campaign School for Women and I have been enjoying the process. I got to know some candidates who were all vying to be the next nominee for Member of Parliament during our next election. I decided who I would support and joined the team. It was enlightening to be behind some of the scenes and I found myself heavily invested in the outcome.

On Saturday, my party held the vote to choose the next candidate whose name would be on the ballot during the upcoming federal election. It took place in a quintessentially Canadian location – a local hockey arena. I was fascinated to see so many people out to involve themselves in this political process. It was exhilarating.

My husband and I brought our four-year-old and our two-year-old to share the experience with us. We’ve tried to involve them in the political process before. During the last election, they noticed signs along the road and we talked about how each colour represented a different “team”. They came with us to the voting station and when we got back home to watch the results unfold on television, we set them up with their own little voting booths and ballots so they could experience voting for themselves. While Cameron didn’t quite remember this experience, he did seem to remember the language we had used during that election. He asked us which “team” we were with and which “leader” we were hoping would win.

I am of the opinion that children should be included in more public experiences. An adult-type event like a political convention might seem like the worst place to bring kids, but if we want to raise a generation who is engaged, it might just be the best place to bring them.

Unsurprisingly, there weren’t very many other kids there. I saw a handful of kids, many of whom would have been children of candidates. My two, and one other little boy I saw, were by far the youngest.

A few weeks back, as our campaign team was discussing how the nomination day would transpire, I asked if there would be childcare available. I received a few looks of confusion. Childcare at a political convention? Why ever for? There has never been childcare at this kind of thing (locally) before. While I recognized that the time to plan childcare may have passed, the reality is that many people would not feel like I do about bringing children to an event like this. Many people – mothers with young children in particular – would see such an event as unaccessible to them because they would have nothing to do with their children for a few hours on a Saturday afternoon.

So often we assume that how things “have always been done” means that those policies are tried and true, but in reality they are keeping certain people down and out.

For example, my husband wanted to join me at the all candidates forum that happened a month ago, leading up to Saturday’s vote. Unfortunately, all our go-to babysitters were otherwise engaged and so he had to stay home with the kids. How often are the roles reversed? It is because I had involved myself that I went, and my husband stayed home. No allowances were made at this forum to provide care for children, or stream the event online to reach those who perhaps couldn’t make it in due to children, illness, shift work, etc. Because of this, people were shut out of the process. And if you start to consider who might not be free at 7pm on a weeknight, you’ll begin to see the types of people who might be shut-out.

During her speech at Saturday’s event, one of the candidates noted that she was a stark contrast to the gentleman who will be running on the ballot for the opposing party. This really resonated with me because we need more voices in politics. We need more diverse options and representations. We can’t count people out because they are women. We can’t disregard candidates because of their occupation. We can’t push aside potential politicians because of their age. “Their time will come” isn’t relevant unless we want to silence the voice of all young people in our country.

And if we keep shutting people out by restricting access, then the political leadership voice will continue to be monotonous.

For my part, I’m going to keep bringing my kids to political events, both so that they can immerse themselves in the process, but also to make the point that young mothers can, should, and want to be engaged in the process. I’m making myself, and my demographic visible, and as my kids stand on the media platform and beat each other up with red and white balloons making a spectacle of themselves, I am making my voice heard. 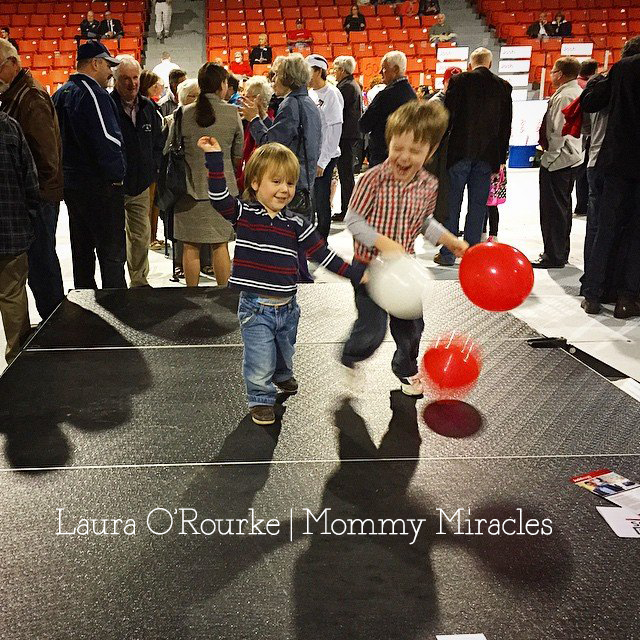 I also pledge to continue to use my platform to show how the status quo is not actually all fine and well. Instead, it systematically shuts out people from the political process. How is that democratic?

And I will look for candidates who represent a different voice in our government. They exist. I might even do my best to help get some of them elected.

The post A Small Voice Among the Political Monotony appeared first on Mommy Miracles.

A Small Voice Among the Political Monotony
https://haligonia.ca/a-small-voice-among-the-political-monotony-98466/