Before I got married 2010, my wife and I had decided to get our first pet together and we adopted a puppy. It seemed like a logical step in our relationship and definitely a stepping stone into parenthood.

We both absolutely fell in love with our puppy Muggsy, and treated him more like a baby than our pet. We celebrated birthdays, dressed him up for Halloween, took him to the beach for walks and he even slept in our bed (he still does to this day). He would have been the ring bearer at the wedding if we didn’t already have young nephews to choose from.

Flash forward four years later and Muggy is still an important member in this family but he’s getting a lot less attention with a baby in the house. Those dog birthdays have been forgotten, there are days where he doesn’t get out for a walk and he’s being scolded more for trying to steal food from our son. Muggsy can’t catch a break lately. Over the past sixteen months, he has had a toddler in the household to share the attention with. I’ve recognized our problem of balancing the attention between a toddler and canine, and will be making more of a conscious effort to make sure he’ll be getting the appropriate attention, especially when my son is in bed.

But, if you have a dog and will be adding a baby to the mix (or vice versa), do not despair. As tough as it sounds to have both a dog and toddler to take care of, there are definitely benefits to having both. 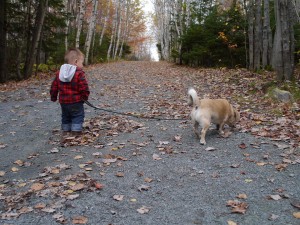 1. The dog keeps the floor clean.
My son loves to throw the food on the floor from his high chair. Muggsy loves to eat my son’s food off of the floor. The floor remains clean once he’s finished licking it up. I think we all win here.

2. A new found friendship
As my son is an only child, he enjoys watching Muggsy run around the house and is excited to see him when we come home from an outing. Muggsy has always been a good puppy and is great around children which is a huge blessing. My son sometimes even tries to go on a doggy-back ride. He’s never successful with this as Muggsy runs away the second it happens, but it keeps my son entertained. I can see a lifelong friendship in the years to come.

3. My son learns how to be gentle with animals.
Despite trying to ride Muggsy like a horse, my son has actually learned a lot about being gentle with animals. As an infant, he was always hitting Muggsy in the face or pulling his fur but after some guidance from us as parents, he has learned a lot about how to properly treat an animal. He’s no longer pulling Muggy’s tail or smacking him in the face and he now knows how to pet Muggsy in a caring and gentle fashion without us having to worry (and even giving him hugs and kisses, sometimes on the lips….it’s kind of gross).

4. The responsibility of having a pet
I know my son is only sixteen months old but he has learned a lot about the responsibility of having a pet. He likes filling up the dog bowl with food, making sure he has water, taking him out for a walks and giving him treats when Muggsy sits on command. Also, as a child who had a lot of allergies growing up, I’m hoping my son will have less of a chance of getting those same allergies after being exposed to Muggsy (and our cat) at such a young age.

Despite the trials and tribulations of trying to provide enough attention to both canine and human babies, having both can be an adventure with beautiful memories formed and friendships made.

Romy is a first-time dad, husband and blogger based out of Halifax. For more dirty diaper stories, check out his Dad blog, Dad Don’t Lie and follow him on Twitter @DadDontLie