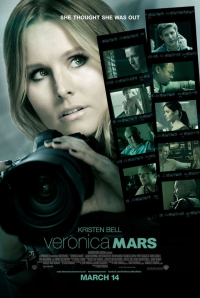 You may know, if you read this little blog a lot, that I’m a huge fan of Veronica Mars. It’s a series I’ve watched in its entirety more than once. I watched a few episodes recently with friends (some fans, some newbies) and the series finale right before seeing the movie.

And I liked the movie so much, that I spent a good portion of my weekend binge-watching more episodes and plan to watch the movie again when I finish the series.

I want to talk about why I liked the movie in detail, so don’t click through for my review unless you’ve seen it. But I’ll say this: if you have never seen the show Veronica Mars before, keep your expectations for the movie low. This film was funded by, and made for, the superfan.

To be honest, I’m not sure how any moderate-to-hardcore fan of Veronica Mars could dislike this movie. If you only ever really liked season one, then sure, maybe you wouldn’t fall for the flat-out audience pandering that took place. But I loved this movie and I’m not ashamed to admit it. 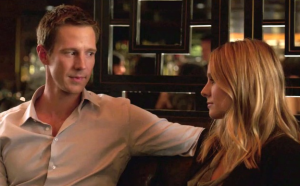 The movie focused on Veronica and Logan a lot. And while I have definitely swooned at their romance in the past, I’m no ‘shipper. That’s not the kind of viewer or fan I am. I liked this movie because of the story, because it was true to the world and characters of the show, because it was well-written and exciting, and because it had so many fun call-backs to a series I adore.

I liked what Veronica had been up to since she left Neptune. It felt right – although her reconnecting with Piz was a bit of a stretch. (My biggest pet peeve with the movie, by the way, was that Piz was working at NPR’s This American Life, which is in Chicago, but seemingly living in New York.)

Veronica’s reason for returning to Neptune was good enough – helping Logan prove he didn’t murder his popstar girlfriend. It was necessary, given that this movie was telling a story about Veronica and Logan. 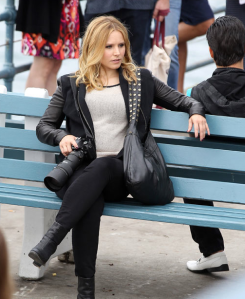 Once Veronica was back in town, a series of plot twists had to keep her there. The murder was part of a larger mystery involving a gang of Neptune High grads, Weevil was shot by Celeste Kane, and Keith got into a serious car accident. The mystery thickened so it would suck Veronica in. She’s an addict. She had no desire for a boring life with a fancy lawyer job and a sweet, stable boyfriend.

When Keith got into the car accident I kind of saw it coming, but I was still on the edge of my seat. And I enjoyed the main mystery – I was so sure that something slightly different was going to happen when Gia got shot, that I had an actual physical reaction of shock at the sound of gunfire.

I liked how the Weevil thing set up a possible second movie. The guy had cleaned up his act, had a hot wife, a cute kid and his own auto shop. When he knocked on the window of an SUV surrounded by gang members to offer help, it was Celeste Kane inside and she shot him. The corrupt police used the opportunity to frame him for a crime. At the end of the movie, when Veronica decides to stick around and try to help rid Neptune of some of its seediness, we know that taking down Celeste Kane will be at the top of her list. Second, I guess, to making the dirty cops who almost killed her dad pay. It’s a good set-up.

What really made this movie was the writing. Rob Thomas has not lost his touch – he still knew exactly how to write for each character and relationship, and the movie had the exact tone of the show. It was so witty. It was dark. Every important relationship – Veronica and her father, Veronica and her friends, Veronica and Logan – was perfect, and had matured since the show. (I love that Veronica can swear and drink now). Dick was maybe even funnier than he used to be, and Gia was bitchier. Veronica is still Veronica – the girl who’d rather see a trial sentence come down than take an important exam is the woman who’d rather solve a mystery than take her first grownup job. 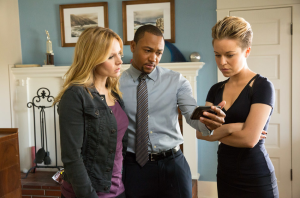 It would have been nice to see Wallace and Mac onscreen more, but with limited time and money I think the story probably had to be quite contained. I was happy with what we got. At its heart, this was a story about Veronica. Veronica and Logan, yeah – but also just Veronica and why she does what she does.

If the story ended here, I’d be OK. I was actually OK with the original series finale, I never felt the need to have the story wrapped up with a neat little bow. I didn’t care that Veronica was still “with” Piz when the story ended because I didn’t believe she’d stay with him.

Now we have a happy ending for Veronica and Logan, and she’s back to being a private detective in Neptune. That’s a pretty tidy bow, but if they continued to tell this story I’d be interested in it. Whether it’s another movie, or a Netflix series, or whatever – as long as the writing is still this good and the characters are still so true to the original story, I’m in.

A Spoiler-Filled Review of The Veronica Mars Movie
https://haligonia.ca/a-spoiler-filled-review-of-the-veronica-mars-movie-90805/