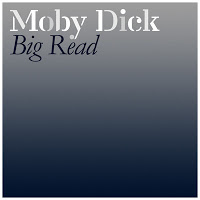 A Whale of a Listen – The Moby Dick Big Read

I have tried twice in the past to read Moby Dick.  Each time I have failed to get much past a hundred pages. But I do want to check this classic off my list.  Maybe I should try an audiobook version?
I guess this is the idea behind the Moby Dick Big Read project, which is providing free audiobook access to the acclaimed novel by Herman Melville. They are releasing a chapter per day. I am a little late telling you about this, as they are already on chapter 52.

“Moby-Dick is the great American novel. But it is also the great unread American novel. Sprawling, magnificent, deliriously digressive, it stands over and above all other works of fiction, since it is barely a work of fiction itself. Rather, it is an explosive exposition of one man’s investigation into the world of the whale, and the way humans have related to it. Yet it is so much more than that. It is a representation of evil incarnate in an animal – and the utter perfidy of that notion. Of a nature transgressed and transgressive – and of one man’s demonic pursuit, a metaphorical crusade that even now is a shorthand for overweening ambition and delusion.” Moby Dick Big Read

Also checkout the MDBR project on their Facebook page