It has taken me a while to get around to this one but, wow, what a story!

In the fall of 1991 three weather fronts, including Hurricane Grace, met to form one of the greatest storms in recorded history. One of the victims of this so-called perfect storm was Gloucester sword fishing boat, the Andrea Gail. The crew was heading out past the Grand Banks when the storm hit. The sea took on a monster-like appearance with waves over 100 feet. Junger re-creates what might have led up to the crew’s fateful decisions and their heroic

attempts to get themselves and their catch home. The Perfect Storm is a window on the dangerous world of offshore fishing, the breathtaking selflessness of search and rescue personnel, and the science of meteorology.

The Perfect Storm is a classic example of a fast-paced, page turning adventure story. As the rescue helicopter crew dropped one by one into the stormy Atlantic with waves as tall as buildings crashing around them, there is no way possible to put this book down. Junger brings these heroes to life. His speculative story about the crew of the Andrea Gail raises many questions about their motivation. Was the late season trip due to the captain’s pride that his catches were falling? Was the potential financial gain worth risking their lives? Did they underestimate the power of the sea? Or did the storm hit so suddenly that all decision-making was taken from them?

Part of the appeal of this type of book is the fact that this actually happened. It always sits in the back of your mind that this really happened to someone. You connect with it in a way that you may not necessarily with an imaginative story.

More than a hundred years before, again off the coast of Nova Scotia, the SS Atlantic ran into problems. Most of the crew survived, but the loss of life amongst the passengers was devastating. Greg Cochkanoff and Bob Chaulk’s SS Atlantic: The White Star Line’s First Disaster at Sea, recent winner of Democracy 250 Atlantic Book Award for Historical Writing and the Dartmouth Book Award for Non-fiction, tells the story of this le 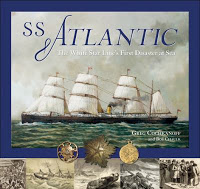 sser known maritime disaster. A series of bad or ill-considered decisions set the ship off course in a storm and she foundered on the rocks. Single women and families were segregated from the rest of the ship’s company. The single women never had a chance. They were berthed in the stern and the icy water flooded the area rapidly. The children and their parents were trapped amidship. There their air may have lasted a little longer, but their fates were just as sealed.

Stories of disaster survival often raise the question of the capacity of human beings to rise to the occasion and struggle against insurmountable odds. This issue is dealt with in the recently published The Third Man Factor: The Secret To Survival in Extreme Environments by

John Geiger. In a Globe and Mail review, ““The Third Man Factor is a mystery story that takes place in some of the most horrific environments imaginable. Geiger’s book has a lot going for it: The many accounts of Third Man visitations in perilous situations make for edge-of-seat reading, and the citations and explorations of the theory of the sensed presence give the book scientific weight. It even contains a moral.”