The Juno Awards – Canada’s major awards for popular music – will be held this Sunday night, April 18th. That got me thinking about books by and about Canadian musicians and the music scene. If you’re a Canadian – particularly rock – fan … you might want to check out these titles.

Have Not Been the Same: the CanRock Renaissance, 1985-1995 by Michael Barclay, Jason Schneider and Ian Andrew Jack. The publication information for this title lists the three authors as being born in the early 1970s. Not surprising then, that they would identify the 10 year period when they hit their teens and traveled into their 20s as influential ones musicwise. But they have a point, there was a real shift from the radio rock Canadian bands of the late 70s into what became described as a more indie friendly Canadian scene through the 1990s. Have Not Been the Same focuses on the history of that period and includes well known East Coast bands that came up at that time like Eric’s Trip and Sloan.

Speaking of the 1990s – recently Halifax band Thrush Hermit played two sold out reunion shows here in town. They were a staple of the Halifax scene in the 1990s. All of the band’s members have gone on to work in other music projects – most notably Joel Plaskett who has gone on to release critically and popularly successful albums on his own and with his project the Joel Plasket Emergency. But did you know that Thrush Hermit’s other guitarist, Rob Benvie, published a novel? The Safety of War was released by Coach House Books in 2004.

The Angel Riots by Ibi Kaslik is a fictional piece of Canadian Indie Rock writing that was released in 2008. Toronto’s Eye Weekly magazine described the book as “a sort of indie-rock tragedy that charts the unexpected rise and semi-collapse of a sprawling collective of starry-eyed Montreal musicians.”

It seems difficult to talk about Canadian rock music of the last two decades and not talk about Dave Bidini. A founding member of the band The Rheostatics, Bidini has also gone on to a successful solo music career. He’s a fan of Canadian Literature – championing the Paul Quarrington book King Leary to a win on the 2008 edition of Canada Reads. And finally, he’s also a writer, having penned books on sports and writing itself, as well as a couple of titles that are appropriate here including On a Cold Road : tales of adventure in Canadian rock and Around the World in 57 1/2 Gigs. 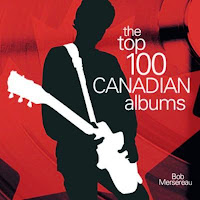 And finally, it’s maybe not the kind of book you sit down and read in the same way you might read one of the novels or memoirs above, but The Top 100 Canadian Albums by Bob Mersereau makes for great reading nonetheless. His selections will inevitably cause debate, but the essays written to accompany each selection offer lots of insight into the artists and albums that were picked. In some ways, this is my favourite kind of reading: a book that you can sit down and look at with friends and argue (amicably of course) over.