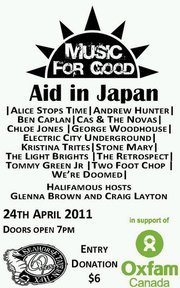 If you want to listen to some great local music and help a worthy cause then this is the event for you on Sunday..