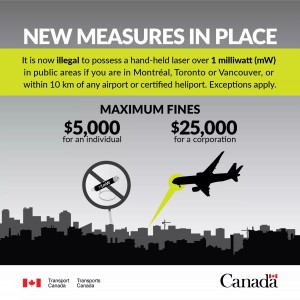 Canadians expect to feel safe on the ground and in the sky. Despite past and ongoing safety awareness campaigns, there are still too many cases of laser attacks on aircraft.

These attacks continue to put the safety of Canadians and flight crew at risk, prompting immediate safety measures to restrict battery-operated hand-held lasers, and further action to strengthen enforcement powers.

The Honourable Marc Garneau, Minister of Transport, announced a new measure which prohibits the possession of battery-operated hand-held laser over 1 milliwatt (mW) outside of a private dwelling without a legitimate purpose, such as for work, school, or education purposes.

This Interim Order takes effect immediately and applies to:

The new measure allows Transport Canada and delegated law enforcement to issue fines on the spot to anyone who possesses a hand-held laser within a prohibited zone without a legitimate reason. The maximum fines are $5,000 for an individual and $25,000 for a corporation.

In addition to the Interim Order, Transport Canada is also designating laser attacks on aircraft as offences subject to immediate fines under the Canadian Aviation Regulations.

A laser is not a toy. Shining a laser into the cockpit of an aircraft can distract the pilot during the most critical phases of take-off, descent and landing and interfere with their ability to land safely. Anyone convicted of doing this intentionally could also face up to $100,000 in fines, five years in prison or both.

Please visit www.Canada.ca/Not-A-Bright-Ideato learn more about the new safety measures as well as the dangers and consequences of laser attacks.

Aiming a laser at an aircraft—Not a bright idea
https://haligonia.ca/aiming-a-laser-at-an-aircraft-not-a-bright-idea-242287/