So it’s Big Brother night and it’s between Brendon and….. 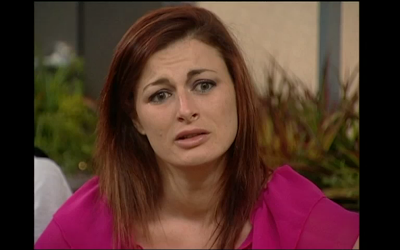 What the hell is wrong with Julie’s hair?
It’s like her stylist teased her hair, got distracted and never came back. And Julie, you’re outfit does not help with the hair. 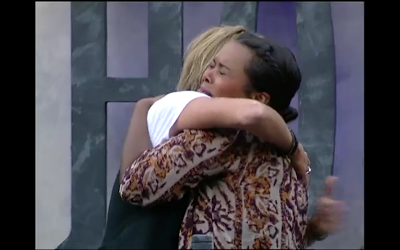 It’s a cross between a school girl and flight attendant uniform, like it’s on the verge of being sexy but then it’s frumpy. Julie, you need a new stylist. One of my friends told me she thought an old episode from 2000 was airing.
Come on guys, vote to keep Boo-Key together
After nominations Rachel CRIED AGAIN! I want to bottle her tears and use it for some sort of voodoo. I will admit I am a sensitive person but girlfriend, suck it up! Rachel can’t live in a house without Brendon? Does he bathe her? Spoon feed her? Then she asks, “Who am I going to jump on when I win HOH?” I have an idea Rachel, a cactus.
Brendon needs only three votes. So far Porsche says she will do it because she and Rachel are friends. “And if I don’t, Rachel will go crazy,” she says. Adam and Shelly seem to have the swing votes in the house.
Houston, we have a mental breakdown
Wow, that Rachel meltdown was epic. Even more epic than my meltdown after my roommate Sarah decided to move our cable box into another room lost both our TV and internet for two days.
How did this breakdown start? Porsche told Rachel, “You have to stop it with the sad thing.” Next, we saw the most dramatic walk to a hammock in the history of hammocks. Listen Rachel, hammocks are for lazy Sunday naps, romantic nights, reading a book, not for breakdowns.
During this meltdown Rachel said a few comments that I mostly agreed with:
Brendon should have never asked to marry her – Brendon seems to be fully entranced by you. If he likes drama and trouty lips I think he made the right choice.
People (the audience) will hate her even more this year – Sadly, yes Rachel, you really have not redeemed yourself this season.
She’s not that smart – Do you recall the way you spelled moisturizer?
She won’t get a job – Well if we live in a post-apocalyptic world and only have your tears as a source of water than yes, you can get a job. Again what happened to the old chemistry degree there Rachel?
Julie Time:
Blah blah blah Adam’s an elf. Blah blah blah Rachel loves Brendon. Blah blah blah Jeff loves Jordan.
What does Dick think? (This should be a title for a new board game)
Evel Dick is not too proud of his little girl right now. He feels she is trying to make big moves too early. He also made a good point that anytime a young boy aligns with her, the guy becomes a big target. In his own words, “she went from Nick to Dominic.” And her dad’s name is Dick. Weird. Watching the clips from this season and past season made me laugh, she really does have a way with the boys.
Brace for a new wave of Rachel Crazy – Brendon Evicted
I want to give an award to all the other housemates for refraining from rolling their eyes or laughing during Brendon’s speech. He keeps saying wonderful things about this fiancé, but who is this mystery person he keeps talking about? All I see is this girl:

Ok, Jordan’s goodbye messages are so funny. I can never tell if some of what she says is purposeful or not. I heart her so much. Rachel’s message was just a series of high pitch noises that finished with something about their future children. Brendon claims that children won’t happen for five years. You got that people; don’t worry about the apocalypse until at least 2016 when these two decide to reproduce.
Return of the Housemates Part 2 – New BB Twist
Julie tells us that two housemates get to face a duel next week that will let them get back in the game and America gets to vote. Why can’t I vote for anything? The last time Canada got to vote for something was the name of our Prime Minister’s cat. It wasn’t even a dog. It was a cat.
Hey, wait a second this is the same premise as Survivor’s craptastic Redemption Island. I would love to see Cassi back on the show but seriously, when you’re out, you’re out!
HOH Competition – Make Sure Rachel doesn’t Win
This HOH competition was about knowledge, speed, and popularity. Two housemates are asked a question related to recently evicted Housemates, whoever made the wrong guess or wasn’t fast enough was automatically eliminated. The person who wins the round got to pick the next face off until one winner remains.
These competitions are never good for hated housemates. This means you Rachel. Here is the take down order.
Jordan vs. Kalia (Jordan out)
Rachel vs. Lawon (Lawon out)
Kalia vs. Adam (Adam loses and has to be bleeped by CBS)
Rachel vs. Porsche (Rachel makes the wrong answer and swears. She swears so loudly Julie has to say, “Housemates, keep it clean.” I just saw a window into mean Mommy Julie.)
Jeff vs. Shelly (Jeff out)
So the final three are Shelly, Porsche and Kalia, which I am totally pumped about. If any of them wins it would be an interesting week.
We have a winner! The woman who hardly did anything is now the new HOH. Then she went into the ugly cry for some reason.

So who will America vote for to come back? Who will Rachel snap at first? And will Julie please get a new stylist?
Other Things: