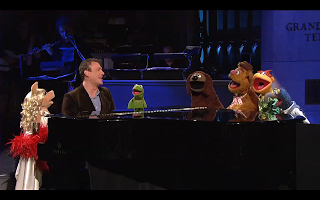 Well, the night has finally come! Jason Segel my #1 celebrity crush is hosting SNL. I am trying not to give this episode too much hope but I just love him. I am looking forward to see if the Muppets show up tonight since Jason not only stars but wrote the new movie.
As Jill wrote an open letter to Justin Long this week, I too would like to write an open letter….to the universe.

Dear Universe,
Oprah once told me that if you want something in life you have to put it out into you (i.e. the universe). I recall her saying it’s how she got the part in The Color Purple and how Apple sent all those Ipads to her Favorite Things episode. I believe her. I mean, she has never steered me wrong. So please, Universe, listen to me. Bring me Halifax’s answer to Jason Segel. Tall, cute, dark brown eyes, funny, has a great laugh, appreciates childhood nostalgia, smart and overall he has to be cuddly
Thanks Universe!

OK, on to the show.
Opener – Mit Romney: Raw and Unleashed
Mit Romney tries to be edgy like his other GOP candidates but he just can’t pull it off. Poor Mit, no one wants to win a contest by default. I’ve won a couple of volleyball games by default and it’s great but you’re left with an empty feeling. This was a solid opener, clever. And there was a good line, “That Rocked Harder than a Josh Groban concert.” 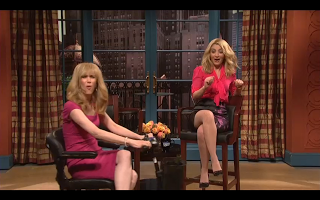 Monologue
He’s here! Adorable. I love how his little jacket doesn’t fit properly. Jason decides to sing about how happy he is to be hosting and is joined by some of his Muppet friends! My favorite of the group has to be Miss Piggy and Ralph the Dog. Jason and the Muppets sing a song that leads to a discussion of who is really hosting the show. This was pretty cute.  Also I forgot that the Muppets appeared on SNL since the beginning. You know a time when Lorne Michaels still said “a-boot.”
(Universe, add that I want my Jason to also wear ill-fitted clothing so I can say “awwwww” and help him out!) 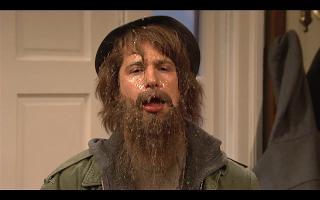 Search for Regis’ Replacement
Since Regis left his show, Kelly needs a new co-host and that means the cast of SNL can have fun with impressions. Some of the best impressions were Taran’s Ashton Kutcher and Abby Elliot’s dead-on Zoey Deschenel. Oh it was perfect, “Oh, I’m not a woman, I’m a little girl, I’m adorkable.” Jason was funny but a little out of place as Antonio Banderas. Then they decided that Kathie Lee should come back and Kristen showed up on a scooter. What was really funny about this skit was how recently I watched an old episode of SNL in which it was Regis looking for his new co-host. How long ago was that you may ask? Let’s just say one of the potential co-hosts was Darva Conger. Remember her? (PS, Universe please add I want my Jason to be able to do silly accents as well.)
Kemper-Pedic Me Time Mattress
Just amazing! Priceless. And seriously, “What were those noises?”
(Universe add that my Jason needs to appreciate this humor but I don’t want my Jason to have a use for this mattress.) 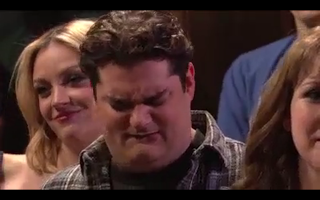 The Govelcheks aka the Making Out Skit
As soon as someone said the phrase, “I can’t wait to meet your family,” I thought, “Oh no! Not the making out skit.” Yes, the skit in which someone meets a creepy family that inappropriately kisses all the time. Always funny and always cringe worthy. These skits try to always to top itself. This time homeless Pete stops by and the family, of course, welcomes him and provides food and gravy. Oh and then Paul Rudd shows up just to make out with Segel. (Dear Universe, make my Jason not so into the making out with other guys, I can’t handle the competition)
Retirement Party
There is a theme to SNL writing lately with skits that really don’t tell a clear story. But man, this skit was hilarious. At a retirement party a couple of things keep coming up. First everyone wants the secretary, Kristen, to say a few words but she, “HAS NOTHING TO SAY?!” Then another creepy employee, Jason, keeps threatening to reveal something that will cause everyone to take a crap. Jason was having a hard time not laughing during this.
Early 90’s Thanksgiving
Bobbi as “Medium Richard” wants to sell you some 90’s Thanksgiving songs. Oh the 90’s! I can’t believe I grew up this time. The nostalgia to the clips were pretty funny but sometimes when songs are written on the show I can’t hear the lyrics so some of the humor was lost on me. This skit was probably the worst use of Jason and his talents. Oh and for fun they brought Florence (you know, from “and the Machine?”)
Weekend Update
Seth had some GOP candidate who is behind in the polls. I don’t know? I’m Canadian what do you expect?
So apparently congress is going to deem pizza a vegetable so this causes Seth to do his famous “Really?” sketch. This time his special guest was Kermit. I wonder if this was also a childhood dream for Seth?
Digital Short: Chess
This reminded me of the Body Fusion skit. How do they make the skit look so old? I love the way Andy says “I’m dying and I never made sex to a girl!” Now this wasn’t one of the better Digital Shorts but it’s one of the better ones of the season. (PS – Universe I am hoping my Jason doesn’t have a history of cross dressing. I mean if he’s an actor yes, I get that, but beyond that. NO!)
Andre the Giant Buys an Ice Cream
My only reference to Andre the Giant is his part in The Princess Bride and from what I recall this is a pretty dead on impression. I am sure Jason just asked the show if he could do this. And they said yes.
Blue Jean Committee
I love LOVED this skit. There are a few reasons.
(Universe I forgot to add my Jason should have a slight musical talent. Not like he thinks he’s going to make it in the big time but just enjoys music for fun.)
So Jason did me proud! He was an excellent host so I hope he gets to do it again. My only complaint is that the whole thing felt so short. And at the end of the night he dedicated the whole show to his family. (Universe, also add that.)
So Universe ….Did you get all that?

Note from Jill: While my love for Jason Segel doesn’t run quite as deep as Allison’s (no one’s does – seriously, Jason, you should tweet her or something) I am a huge fan and I loved this episode. I don’t always watch all of SNL, but I didn’t fast-forward through any of this episode. Jason might not have been the funniest host so far this season (Hi, Melissa McCarthy! I see they’re replaying your episode next week!) but he’s by far one of the most endearing dudes on TV. I loved his monologue, the Kemper-Pedic commercial and the Blue Jean Committee. (My other favorite parts of the show were the search for Regis’s replacement and Weekend Update – I love Seth Meyers and that segment made me laugh so, so many times. Especially Kermit.)