Last night’s episode of The Amazing Race was another exciting one, but the ending left me feeling disappointed and a little annoyed. Since I know some of you guys don’t watch the scenes from next week, I’ll write about that at the end of the post following a requisite spoiler alert. But first things first, let’s talk about the jam-packed episode.

Teams were sent to the statue of Hans Christian Andersen, famous Danish children’s author. It was a Roadblock, and one member of each team would have to memorize a poem inscribed on the base of the statue and the ride a bicycle to a nearby theater to perform it. The map to the theater was drawn on the front wheel of the bicycle, and teams would only get the next clue if they performed the poem accurately and with the right amount of dramatic gravitas. That meant cheesy vocal inflections and hand movements, y’all. Basically, you got sent back to the statue if you didn’t act like a big enough idiot. It was hilarious.

The poem was “To move, to breathe, to fly, to float, To gain all while you give, To roam the roads of lands remote: To travel is to live,” and the first few teams performed it with the right amount of sweeping hand movements and overwrought emotion. Cindy was first to finish. Cathi and Tommy had departed the statue second and third but they both got lost, allowing Amani to arrive at the theater in second place. I’d questioned Marcus’s bizarre tactics of trying to distract her by shouting random words while she memorized the poem at the statue, but apparently they worked. Amani completed the performance and was second to receive a clue.

Cathi went next, but she messed up a word and had to turn back. Then Tommy was rejected for being too wooden. Sandy had the same problem, and was also sent back to the statue. All three players got it on their second tries.

Next the teams were instructed to head to Legoland. Legoland! And then I turned off the show and started Googling flight rates for Copenhagen. Just kidding! But seriously, I want to go to Legoland.

There were no Detours this week, and both members of the team had to complete the challenge. Teams would have to solve a Lego puzzle while riding on a spinning Tilt-a-Whirl type ride in order to learn the location of their next clue. It was a dizzying challenge, but no one threw up so we were spared any grotesque footage or sound effects.
Ernie and Cindy finished first again and headed off to the Hamburg train station in Germany. Unfortunately, as other teams began arriving at Legoland Bill and Cathi got lost in Copenhagen and fell into last place. Not that it ended up mattering, though – as all the teams completed their puzzles and arrived at the Hamburg train station they learned they’d be taking a 12:30 a.m. train to Brussels. Bill and Cathi made it to Legoland and completed the puzzle in time to arrive in Hamburg and join everyone else on the same train. While I was happy to see Bill and Cathi get a second chance, seeing the playing field leveled mid-leg meant losing some momentum.
The biggest drama of the journey also ended up being a bit of a letdown. Cindy had a lapse in her detail oriented OCD ways and dropped half of her and Ernie’s tickets in the train station. They never found them, and couldn’t afford to repurchase them. I don’t love or hate Ernie and Cindy, but for the sake of excitement I was hoping they’d get kicked off the train halfway through the journey. Unfortunately no one ever came to check tickets, and all was well.
Flex For Your Life
The field leveling train ride meant that everyone arrived at the next challenge basically at the same time, which was another task that was neither a Roadblock or a Detour. Teams had to don teeny tiny bikinis and Speedos, rub self-tanner all over their bodies, and perform a bodybuilding routine in front of a panel of three judges. And as I watched all five teams crowded into a room rubbing tanner on themselves, I wondered if perhaps this was the silliest episode of The Amazing Race yet. Especially because we got to see Phil demonstrate the challenge!
It was pretty hilarious to see everyone in such miniscule clothing. I mean, seriously Bill and Cathi! Y’all looked GOOD. You’re grandparents, for crying out loud! Impressive.  I loved seeing how uncomfortable Andy and Tommy were with the whole ordeal, the fact that Amani’s sideboob had to keep being blurred, and the fact that Marcus (who still has a pretty impressive post-NFL  six-body) got so into it once he was in front of a crowd of cheering people.
Ernie and Cindy performed first and were only awarded nine points when they needed at least twelve. Cindy blamed Ernie’s lack of attention to detail, which reflected so well on her since she’d just dropped their train tickets on the floor and almost lost the whole thing for them. Next Andy and Tommy went and got shockingly low scores – only four points! It was strange, because I expected them to rock this. It’s a physical challenge and they’re both in great shape. They did well with a dancing challenge once before so we know at least one of the dudes can pick up moves, and they’re just generally good at all challenges always. I don’t know why they couldn’t pull it off. 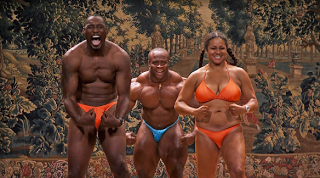 Amani and Marcus were the first to hit the required score of twelve, and they took off for the pit stop. Then poor Bill and Cathi performed, and only got a score of three. Ouch. Weren’t the judges impressed with how physically fit they are for grandparents? Ernie and Cindy managed to get 12 points on their second try, and Jeremy and Sandy hit a new high with 13 points on their first performance. (No surprise there, Ken and Barbie: The Divorcee Edition.)
Amani and Marcus arrived at the pit stop first to win a trip to Panama…aaaaand to receive the news from Phil that they’re still racing. And that’s when I got annoyed. Not only was this basically a glorified non-elimination episode, which we’ve had WAY too many of this season, but it killed the entire narrative of the episode. The playing field was leveled in the middle of the episode, thus killing the momentum, and then all drama is sucked out of the episode at the end by not showing us the results of the leg. What gives? And that’s not all. Spoiler Alert from here on out for those of you who didn’t watch the scenes from next week and don’t want to know why I’m not thrilled with this news.
So, for those of you who saw the scenes from next week, is this a non-elimination leg? Or did they just ruin the results for us? When the episode cut off, Cindy and Ernie and Jeremy and Sandy were on their way to the pit stop, presumably to be checked in second and third and then sent on their way. Phil announced that Amani and Marcus were first and awarded them a trip, which seemed to act as a distinction between two separate legs of the race rather than one long leg that hadn’t ended yet. So with both Andy and Tommy and Bill and Cathi still struggling at the bodybuilding challenge, it would look as though one of those teams are going to be eliminated.
So then why did they show us Andy and Tommy participating in the next episode? In fact, we saw everyone but Bill and Cathi. So either they’re screwing with us and no one will be eliminated at this pit stop AGAIN, or the TAR producers totally ruined the results for us. Either way, I’m mad.
So what do you guys think? Is the most likely answer that no one gets eliminated at the pit stop? Are you tired of not seeing anyone go home? What did you think of the challenges this week?

The Amazing Race: Once more, with feeling!
https://haligonia.ca/the-amazing-race-once-more-with-feeling-49250/