Two more girls went home on Sweet Home Alabama this week, and I can’t say I was surprised by either elimination. So let’s talk about all these dates Tribble went on this week, and the girls he sent home. 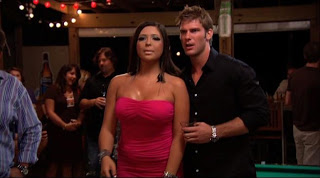 First up Kristina “OC-licious” With a K, and this was a date I was really looking forward to watching. Miss OC-licious didn’t disappoint either, and she dressed to the elevens to accompany Tribble to the Chrome Horse, a local honky tonk bar. On top of the usual overdone makeup and glittery hair and nails, we’re talking a teeny-tiny tube dress, thigh high boots and was covered in body glitter. I’m pretty sure she watched Pretty Woman as inspiration and said “Julia Roberts looks cute but she’s too covered up.”

That said, I actually like Kristina. I mean, yeah, some things make me want to hit her in the face with her own hair – she owns a pool table but never plays it (OK, a lot of people are probably like that) and talked about how her dad should just give her and Tribble a car dealership and they can just hang out, make money and be bi-coastal. I hope/think she was kind of joking about that, but I can’t be sure.

But one thing you have to give Kristina is that she’s a terrific sport. Remember when she shoveled horse manure in stilettos? Well, by the end of her date with Tribble she was shooting pool and seemed to be BFFs with half the folks in the bar, who’d all been staring daggers at her when she walked in.

Tribble seemed to genuinely like Kristina, but it seemed obvious that they don’t have enough in common to form an actual, real-life relationship. So I wasn’t surprised to see her go home later. Tribble only sent two girls home, and they were both girls he had one-on-one dates with. Kristina probably knew the spark wasn’t really there, and she was classy about it. Proof you can’t judge a book by its cover, maybe? 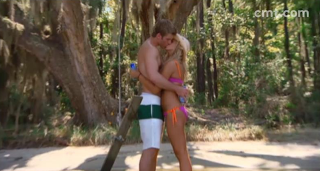 Next Tribble had a date with Tristan, and it was the chemistry he had with her that made the lack of spark on the other dates obvious. It was similar to when Tribble went out with Cassie a few episodes ago – he and Tristan just seemed to have a connection. It seemed like a really fun date (there was jet-skiing, so how could it not be?) and it also seemed like Tribble and Tristan had stuff to talk about – always a good sign on a show like this. Tristan was the first girl to kiss Tribble (despite what poor Jackie might think) and it was nice to see that initial connection pan out. I won’t be surprised to see Tristan end up in the final two or three.

Pulled Pork with a Pal 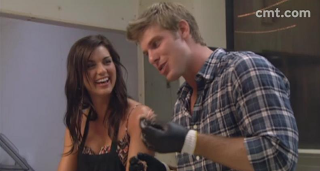 The third one-on-one date this week went to Paige. I thought it was interesting that Tribble wanted to test the chemistry he felt with Paige, to see if the connection he’d felt when they kissed at Clemson was thanks to nostalgia and not an actual romantic spark.


The date was fun – they made pulled pork sandwiches (Mmm! Believe it or not, Halifax has a fantastic Southern-style BBQ place. It’s authenticity has been confirmed by someone I met from Tennessee.) and played arcade games. The problem was, it was only fun – these guys definitely felt like pals. So again, I wasn’t really surprised to see Paige sent home as well. Like Kristina, she took the news well and probably also realized that there wasn’t much of a romantic connection there. She even gave Tribble some parting advice and told him she likes Tristan the best.

The group date this week was a trip to the golf course. Tribble’s dates sure are athletic! Pool, water-skiing, basketball (OK, that was an arcade game, but he was still freakishly good at it), golf…if I were on this show, I’d have been crossing my fingers for the date Kristina with a K got. Pool in a local dive is way more my thing than golf, especially since I hate golf attire. Plus I’m awesome at pool and, based on what I saw, I’m 90% sure I could beat Tribble and 100% sure I’d beat Kristina with a K.

So Tribble played nine holes of golf, spending one hole with each girl. Jackie, who got the first real date of the season, noted that it had been such a long time since she’d been alone with Tribble. It won’t be anymore though, since Boyd informed her that she’d be getting another date later that night at the elimination ceremony. (Also, Boyd, what a trickster you are! Telling Jackie she’s a yankee and isn’t welcome ’round these here parts? Cruel!) 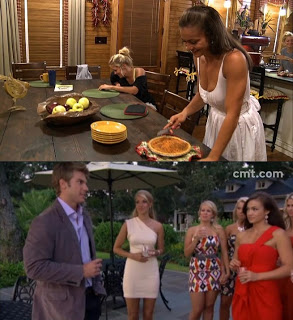 Ashley Ann, of course, turned on the charm on the golf course. Ugh. I can’t stand her. (If you haven’t read my interview with Tribble from last week, you really should. He has some honest things to say about her.) Now let’s talk about Miss Ashley Ann this week. First, she gave all the girls food poisoning in the house with her sweet potato pie. They even had a clip of her saying the secret to a great sweet potato pie is the person you’re making it for and the reason you’re making it! It was priceless. I also have to ask, does anyone else think Ashley Ann went out and bought a bunch of orange clothes to do this show because she knew Tribble went to Clemson? Because she sure does wear an awful lot of orange.

So next week, Tribble will send three more girls home – there are only seven left now, so that’s a big cut. My predictions are Courtney, Mandy and Jacqueline, but that isn’t based on much. Courtney’s only 21 and hasn’t spent much time with Tribble, Mandy’s got a kid and Jacqueline just seems too prissy. But even better, some kind of dispute between the girls seems to break out in front of Tribble in the upcoming episode and he gets mad. I can’t wait to see what all that is about!