Can any host really top what Jason Segel pulled off two weeks ago? Allison, no! You have to give other people a fair chance.
I was surprised there was a new episode of SNL this week and also surprised with its guest host Steve Buscemi (allow me one moment as I add Buscemi to my spell check….there!) Since Steve’s current claim to fame is HBO’s Boardwalk Empire I kind of forgot he is also a comedic actor. Remember he always shows up in Adam Sandler movies? He is hilarious as that ‘drunk’ brother in the beginning of The Wedding Singer. And he was a big part in one of my dad’s favorite, The Big Lobowski.
I have high hopes for Steve; I know he is a great actor and maybe it’s time for him to change the pace. As you can tell from Jill’s blogs, Boardwalk Empire doesn’t always move fast.
Monologue
This was the funniest monologue (besides Melissa McCarthy’s) so far this season. Steve mentions how he is a character actor who successfully made it to leading man status. This prompts other “character actors” in the audience to ask him for advice. First to ask a question is a character actress who always plays the “best friend” in every romantic comedy who carries a lot of shopping bags. Hard to explain but as you watch it you will laugh and say to yourself, “So true!” My favorite was “sassy black female judge.” 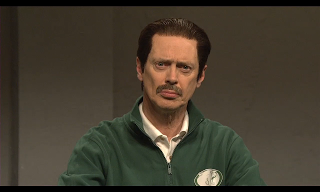 I am sensing that Steve is going to be the straight man for most of the show but we will see.
Miley Cyrus Show
Man this sketch hasn’t been on for a while. Now that Miley is older (19) the sketch doesn’t work as much because she is, dare I say it, becoming an adult. Yes, she still talks like a moron but she’s not a little girl any more. But the sketch comes with the timeliness of Miley in hot water for having a “Bob Marley” cake at her recent birthday. Apparently, this cake is just a big elaborate joke. Miley doesn’t like weed at all. Yeah right! Any way the writers have fun with this concept and show Miley having a case of the munchies and inviting her new friend Jeff on the show. She met Jeff during “Burning Man.” No worries, Billy Ray got this under control when he invites Whitney Houston (awesome appearance by Maya Rudolph) for an intervention. I love Maya’s portrayal of Whitney. She randomly sings and her dance moves are borderline nervous ticks.
Frozen Mexican Dinner
Now, was this a parody of a real ad? If anyone knows please let me know. (Trust me I Googled this and couldn’t find any evidence). This skit was gross and funny and it was a friendly reminder that you have to be careful eating a lot of Mexican food. Also, I loved Paul Brittan’s maraca performance post Mexican meal.
Coach Bert
Sadly, due to some recent news stories, sexual predators in the sporting community have become a hot topic in the news lately. So how does SNL deal with this? They write this very controversial yet hilarious skit. A university calls a press conference to announce that after a full investigation, Coach Bert is not a predator. This investigation wasn’t provoked by someone claiming he did something, it’s because he doesn’t have friends, lives with his mom, and frankly looks like this: 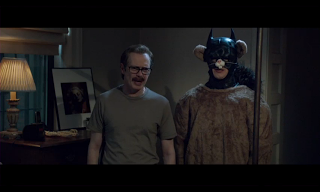 So wrong but so funny. Buscemi was again the straight guy but his face was perfect for this sketch.
Digital Short: Batman
First, let me say if Gary Oldman couldn’t play Commissioner Gordon in a future Batman movie then Steve would actually be an excellent choice. (Not like that Katie Holmes/ Maggie Gyllenhall switcheroo, that was ridiculous!) Now THIS is definitely the best Digital Short of the season. Batman keeps warning Commissioner Gordon of crime in Gothem. That’s all I say. Oh and to answer the age old question, “What if Batman dressed like a squirrel for Halloween?” it would look like this:
Dateline
It’s like all the sketches are from last year or two years ago. Bill Hader does his hilarious Keith Morrison impression. I find this funny because I know who he is because, as you guess it, I watch a lot of TV. Here’s the real Keith Morrison.  He really does make these sounds. At the end of the skit I wonder, how on earth did Kristen Wiig get away with saying that dirty line in that sketch? Yuck!
Surprize Lady
When the sketch started I thought, “Oh I love when Kristen does this.” But I was sadly disappointed. Has the character gotten old or was this situation just not as funny. Seriously, why was this sketch at Playschool? SNL are you now forced to include production integration? Was Tina Fey not exaggerating when she writes about this in 30 Rock?
Weekend Update
Seth’s guests were Hermain Cain and a new character by Bobbi called, “Drunk Uncle.” Drunk Uncle was funny but made me sad that people really do have to deal with a drunk Uncle over the holidays. The segment wasn’t too memorable so I will leave it here.
Sex-Ed Vincent
This character was done once and I was happy that they gave it another chance. And again, Mr. Buscemi plays a very creepy character. This time he is an erotic chef who doesn’t cook; he just reminds people that food can look like certain body parts.  I like how they kept using the phrase, “You can see where I am going with this?”
Ornaments
This is how I think this sketch was written. One funny person on the writing staff was given a box of ornaments and improved stories about each item. People then wrote down word for word what that person said and gave it to Steve. That’s my guess. I really thought this was funny and just weird. Was Steven supposed to be playing Steve?
This episode was really funny. I think the writers had fun with Steve and seemed to really enjoy putting him in the “creepy guy” roles. But next week is Katy Perry and I am not looking forward to that. I am predicting already that every character she will play will be either an airhead or some doe-eyed character. Oh and she will also play Zooey Deschenel or something.
Thanks for reading.
Note from Jill: This episode of SNL is still on my DVR, but after reading this I’m really looking forward to watching it. And I actually think Katy Perry is quite funny, so I’m looking forward to seeing her host next week! But you know, I also love Zooey Deschanel.