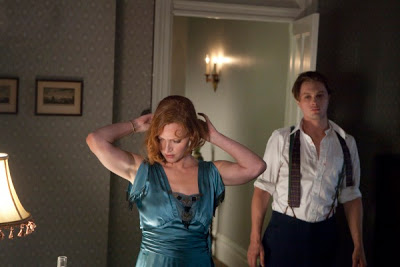 So yeah, last night’s episode of Boardwalk Empire? That was, um, something. Gross, sick, crazy and screwed up are all words that come to mind. Also, I think for everyone there’s a little bit of “I KNEW IT!” mixed in there, as the show had been building toward this since we first saw Jimmy and Gillian reunite with a little more affection than normal.

I’m still not a huge fan of this show and there’s still a pretty good chance I won’t watch it again next season, but I’m glad I decided to at least finish out this season. In the wake of his wife Angela’s death, Jimmy flashed back to their time together when he attended Princeton…and his mother’s visit to the campus. She met Angela – who Jimmy had been romancing for a short time and who’d just told him she was pregnant – and she didn’t like her. Obviously. Because Jimmy was hers. They drunkenly stumbled into Jimmy’s room after attending a party and it all seemed inevitable…

The flashback and the sexual encounter between Gillian and Jimmy, mother and son, explained so much about their relationship and Jimmy’s life afterwards that I kind of wish we’d seen it earlier. Angela confesses that she’s pregnant and he promises her that they’ll find a place, live together, maybe get married. His mother is jealous, drunk, and she kisses him saying “There’s nothing wrong with it, baby. There’s nothing wrong with any of it.” Jimmy is an active participant, but unlike his mother he knows it’s wrong.

Everything that has happened to Jimmy since – joining a war he couldn’t have cared less about, marrying Angela, reuniting with his mother, joining forces with his father to take down Nucky – show that this kid is way too messed up, too filled with shame and self-disgust, to be the next Nucky Thompson. He’s not just in over his head when it comes to the business of selling booze and being a gangster. He’s in over his head in life. At the end of the episode he’s a broken man. He’s snorting heroin, barely present, he almost kills his mother and then does kill his father.

The problem with this episode, for me, was that other important moments were overshadowed by the loud and shocking Jimmy/Gillian/Commodore material. The scene where Richard Harrow touched the blood left on the floor from Angela’s murder was a brief, but sweet acknowledgment of the underdeveloped relationship between Angela and Richard. And this episode saw what was likely major developments in the relationship between Nucky and Margaret, but I was so caught up in the other storyline that I can barely remember what happened.

Nucky and Margaret butted heads over her belief that Emily’s sickness is punishment from God for Margaret’s bad behavior. While I like the tension that has been created between these characters and what this change of heart in Margaret could do to Nucky, I’m not sure I believe that Margaret would suddenly be so religious. I know she was always religious, but she quite readily abandoned those beliefs when she became involved with Nucky. Now, suddenly, she truly believes that her daughter’s illness is a direct punishment from God for her own sins? It seems like Margaret was once depicted as a shrewd, rational character, someone who was eager to have Nucky confide in her about his business dealings and take an active role in what he was doing. Now she’s being manipulated by priests and is considering betraying Nucky and testifying against him to cleanse her own sins? I suppose you could argue that Margaret has always done what she thinks is best for her and her family – she took up with Nucky to provide for them, and now that Emily is sick she’ll betray the man who’s given her so much if it means regaining Emily’s health. But I just don’t believe that someone like Margaret would really think she can barter with God like that. While I’m not a fan of what I find to be inconsistencies in Margaret’s character, I’m still intrigued by her relationship with Nucky and I look forward to what’s to come – especially if he ends up signing over much of his wealth to her in anticipation of being sentenced to jail time or death.

I’m also glad the show finally referenced Van Alden’s murder at the baptism last year. I’ve never really liked his storylines – especially what he had going on with Lucy during the first half of this season – and even learning a little more about his backstory didn’t interest me more in his character. Now he’s on the run and can’t testify against Nucky…but Margaret could. While I’d like to see Van Alden brought to justice for his many sins, I wouldn’t lose any sleep if we never saw that character again, either.