WOW. Can you believe it? Not only did an Andy and Tommy win seem inevitable on this season of The Amazing Race, but I thought for sure that they’d be participating in the final leg. Having won six legs, the dudes were clearly the strongest team left in the race. Yet an error at a pivotal moment and an unfortunate cabbie situation meant that they were eliminated, and next weeks finale will be the Clash of the Underdogs.

Really, its anyone’s game now. Jeremy and Sandy, Ernie and Cindy, and Amani and Marcus have all had up and down moments this season. They’ve all come first at one point, and they’ve all made mistakes at other points. I’ll be rooting for Amani and Marcus, but I have to say overall I’m disappointed in this season. I never found a team to root for that was both likable and seemed to have a chance of winning. And this final three feels so weak that no matter who wins, I won’t feel as though they REALLY earned it. 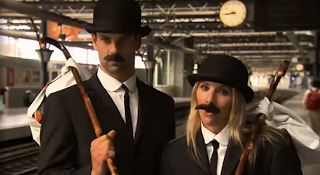 The leg started off rough for Andy and Tommy, even though they departed the Atomium in Belgium in first place. The teams were given a picture of a guy dressed as the Belgian cartoon character Tintin, and a pair of costumes. As Andy and Tommy pointed out, they looked like Charlie Chaplin – canes, mustaches – but they weren’t. I too was confused – I thought everyone was dressed the same, but apparently there were three options: Thomson and Thompson, Jonson and Johnson, and Dupont and Dupond.


While Andy and Tommy asked passersby (people who are out at 4:00 a.m. generally do not know a lot about Tintin, though) and fruitlessly checked for answers online, all three other teams figured out the answer. Everyone ended up on the same train, and then flight, to Panama though.

Upon arriving in Panama, teams had to travel by boat to a nearby village, where they’d all sign up for tattoo appointments the next morning. Tattoos! No one knew if they were going to be permanent or temporary, and I was surprised there wasn’t more freaking out. Am I seriously supposed to believe that Cindy was cool with getting something inked onto her body forever with no control over what that would be?


It turned out that the “tattoos” would be temporary, and they led teams to their next clue at Panama City’s San Francisco Bay Tower. There they’d face the Roadblock, which required one team member to walk across a tightrope from one tower to another — 35 stories above ground! It was definitely scary, but I’m pretty sure I could have done it. I don’t have much of a fear of heights. (Which is good, because my boyfriend and imaginary Amazing Race partner texted during the show to say he wouldn’t have been able to do that.) Andy, Sandy and Cindy were all required to perform the Roadblock because their partners had already done six. For Sandy, this was a big problem. Amani opted to perform for her team because of Marcus’s fear of heights. None of the racers suffered from major problems with the challenge though, and soon everyone was well on their way to the next task.

The clue for the next location read “Success in Suez led him to Panama. His failure inspired others to succeed. Find him beneath a rooster and you’ll find your next clue.” and led the teams to a statue of Ferdinand de Lesseps, where they faced the Detour: Filet or Sole. Or, as my boyfriend put it, “Stinky fish or stinky feet?”

Andy and Tommy, Jeremy and Sandy and Ernie and Cindy all opted for Sole, where they’d have to construct a pair of leather sandals for someone. As they so often have, Amani and Marcus chose the detour no one else did, Filet, which sent them to a fish market to deliver specific amounts of seafood to several vendors. But in a weird move that I thought just might cost them the game, Amani and Marcus accidentally arrived at the other Detour option, saw all three other teams working away on their shoes, and still left to find the one they’d chosen. Maybe they really don’t like sandals, but if I arrived at a Detour and saw that everyone else was already there, I’d just get to work.

Part of the reason Amani and Marcus had ended up at that Detour was that several of the cab drivers seemed to be working together – a very strange phenomenon for a show like The Amazing Race.

As per usual, Andy and Tommy breezed through the challenge while the other teams’ shoes were rejected on the first try. While they corrected their mistakes, Amani and Marcus delivered their fish and moved ahead to second place. Everyone was instructed to head to Cathedral Square. There they found a group of dancers, and written in ornate lettering on one woman’s voluminous skirt was the name of the next pit stop – Panama Viejo. An image of the location was also etched onto the medallions on another woman’s gold necklace.

There ahead of everyone else, Andy and Tommy misidentified the clue as Balboa Avenida and headed to the wrong place. Amani and Marcus arrived next, followed shortly by Jeremy and Sandy and Ernie and Cindy. The three underdog teams were clustered together, yet two of them made the same mistake that Andy and Tommy had. While Ernie and Cindy and Amani and Marcus also took off for Balboa Avenida, Jeremy and Sandy headed towards the correct location thanks to a sketch Jeremy took of the picture on the necklace.

And then it all came down to luck. While Andy and Tommy realized their mistake and headed back to Cathedral Square, Jeremy and Sandy’s cab driver called his buddies and told them where to go. Suddenly Amani and Marcus and Ernie and Cindy were also on their way to the correct location, and poor Andy and Tommy were left to actually figure out the clue. 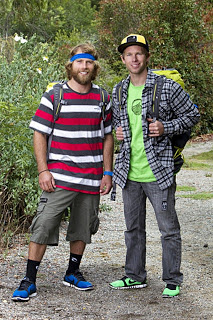 Jeremy and Sandy arrived in first place, followed closely by Ernie and Cindy in second and Amani and Marcus in third. After dominating the race all season, Andy and Tommy were eliminated. While I never exactly liked the guys, I couldn’t deny their skills in the race and felt bad that they went out in such a crazy, unfortunate way. Yes, it came down to a mistake they made at the wrong time – but it also came down to a very bizarre cab situation. Many a team has lost the race thanks to a bad cab driver, and Andy and Tommy were instead eliminated thanks to several overly helpful drivers. I’m sure we’ll see them back on the next All-Stars season though.

Even though these aren’t my three favorite teams, I’m looking forward to next week’s finale – that map challenge looked awesome! Who are you guys rooting for?