American Idol wrapped up on Wednesday night, but as you know there’s always a long road to finding out who won. Luckily, in recent years Idol has figured out how to make these two hour long finales less painful and more…well, entertaining. In fact, they make them so good I actually forget I’m watching to find out who won. Which is good, since they never get to the results until the last five minutes of the show.

Going into the finale, I really wasn’t sure who would win. Up until Tuesday night I was pretty sure it would be Scotty, but I thought Lauren had stronger final performances. Still, thanks to the power of teenage girls, if you’d forced me to make a prediction before the show I would have guessed Scotty. 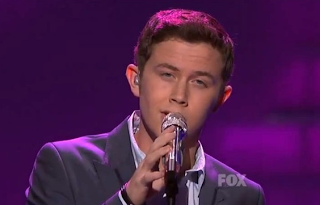 I’ll start with the results, since I don’t want to bury the lead. Poor Lauren looked absolutely sick before Ryan read the votes, even though she looked beautiful in her yellow dress. Ryan ripped the band-aid off quickly – Scotty McCreery won. I was really, really hoping it would be Lauren. You can’t win ’em all, I guess. Scotty said he had to thank the lord first, who got him there, but that’s wrong – he should have thanked teenage girls first, because they got him there.


The show itself was long and packed with performances and other material, so I decided to go kind of live-blog style for my review and hit you with one thing at a time. Here’s what I thought of it all:

The show opened with a group performance of “Born This Way”, which was as OK as a group performance like that can be. Some people just aren’t meant to dance around singing “My mama told me when I was young, we’re all born superstars.” I’m looking at you, Paul McDonald.

James Durbin and Judas Priest performed together. This was, you know, fine. I don’t think I could name you a Judas Priest song if you offered me a thousand bucks, so the excitement of the performance was a bit lost on me.

The tribute to Randy “In It To Win It” Jackson was funny, and appropriate. Ryan was right, they do need to get him a new writer next season. Or, you know, just get a new judge.

Casey Abrams and Jack Black sang together, and it was amazing. Really, I loved this performance. The matching metallic suits, the Queen song, the fact that we knew Casey loves Jack Black and admires his career. They had great chemistry, too. It was fun, it was funny, it was exactly what I want from an American Idol finale.

The Idol Girls did a Beyonce medley, and it was actually pretty good. Most of the girls were voted out so soon that I’d forgotten about them I was reminded me that poor Thia Megia was kicked out far too soon, and that Karen didn’t really belong in the finals. Overall it was really fun, though, and I was excited to see Beyonce come out and join them.

The tribute to Steven “The Loose Cannon” Tyler was a hilarious compilation of all the ridiculous things he’s said all season. Do y’all think Steven will do another season? I’m not sure I think it would be the best…he was fun

Haley Reinhart and Tony Bennet singing together was delightful and showcased exactly what I love about her. If you’ve been reading all season you know how much I grew to love Haley, so that’s all I’ll say. And Tony Bennet is doing pretty damn well for 85, don’t you think?

Jennifer “The Most Beautiful Woman in the World” Lopez got a nice tribute – lots of people calling her pretty and Randy trying to hog the attention. It was funny. You know, when I was growing up I idolized Jennifer Lopez. I wrote an essay in the eighth grade on how I wanted to grow up and be like her, doing music and movies and have my own perfume. I have none of these things, as I am not nearly as talented or pretty as her. I have really liked having J.Lo on the show, and I think if the third judge had been someone tougher than Steve Tyler, I would have called this judging panel a success.

Speaking of a throwback to my childhood, TLC performed a medley. I was obsessed with them in junior high. So, so obsessed. It was a little sad because Left Eye died, but it was still a thrill to see them sing.

Scotty McCreery and Garth Brooks performing together was, I’m sure, a kick for people who like that kind of thing but it was completely lost on me.

Marc Anthony performed with Jennifer Lopez, which was nice. He sang and she danced. Marc Anthony might be one of the least attractive, most sickly looking men I’ve ever seen, and I have no idea how he landed a goddess like J.Lo, but his singing is lovely. Still, watching her dance near him blows my mind. He has her!? I’m not going to lie, I threw up in my mouth a little when I saw them kiss.

I loved the footage of Casey and James arguing over whose elimination was more shocking, only to have Pia arrive wearing a sash for the honor. I’d have given that crown to Casey, Part 1.

The Idol guys sang a Tom Jones medley, which was surprisingly good. I had no idea how many Tom Jones songs I know. And, um, holy crap, Stefano – why weren’t you that sexy when you were on the show? What gives? Anyway, it was all going very well (Paul! James!) until Scotty came on the scene. I believe he ruined my mom’s favorite song. Casey singing “Delilah” was awesome, and then Tom Jones came out and joined them. The dancing alone was worth my time.

The American Idol finalists always get cars from Ford, but it was nice to see them get to hand over sets of  keys to their favorite teachers.

Lady GaGa singing “Edge of Glory” was great, but I’m a big GaGa fan. She may have taken it a bit far for a family show, though. Just sayin’.

I was hoping that Lauren Alaina would sing with Carrie Underwood, and they did me proud with “Before He Cheats”. Lauren was so cute with her “Tell ’em, Carrie” and she held her own next to Carrie, an incredibly talented singer.

The video of everyone making fun of how young Lauren and Scotty are absolutely cracked me up. This was a talented season, and a lot of them had great personalities.

Beyonce’s performance was good – I was glad she didn’t do “Run the World (Girls)” since that song has been everywhere lately. Holy crap, the woman can sing, though.

Next, we got a glimpse at Broadway’s biggest disaster – the Spiderman musical. Bone and The Edge performed with a guy who looked like Kris Allen but wasn’t, and Spidey flew around the audience a bit and then scared the crap out of poor J.Lo. Thanks for the preview, Idol, but if I get to New York I’ll still be looking for tickets to Wicked.

Before the results, we were treated to Steven Tyler singing “Dream On” and playing the piano. Did y’all know he could play? I mean, he was no Billy Joel (yes, that is my example of a great pianist – deal), but still. I was impressed. And his singing was good, despite all the throat issues he’s had. It was short, but sweet.

And that pretty much wrapped up the show, considered I opened with the results. I’d be lying if I said I wasn’t disappointed. The season seemed to have so much potential at the beginning, but it just didn’t pan out. The judges didn’t judge enough, teenage girls dominated the voting, my favorites were gone too soon. I guess I should be happy that Haley survived long enough to really show us what she’s made of. What did you think of the season, and the finale? Did the right person win? Sound off in the comments, and I’ll see you next season!

American Idol: Beam Him Up
https://haligonia.ca/american-idol-beam-him-up-38414/