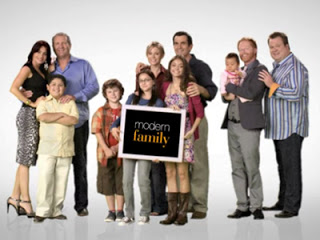 I wish Modern Family and Cougar Town hadn’t had their season finales the same night as the American Idol finale, because I would have liked to watch them the night they aired. Unfortunately, even though I wasn’t so into Idol this season it’s still something that has to be watched live.

But I did get to settle in and watch both shows last night, and oh man, were they funny. Modern Family did such a great job of incorporating running jokes into the storyline, which focused on the family celebrating Jay’s birthday.

All poor Jay wanted to do for his birthday was spend a little quality time alone, fishing. Unfortunately, he spent the day helping everyone else escape disaster. 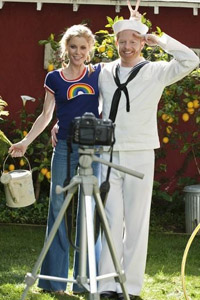 First, he had to go pick up the dog for the beauty parlor, because Gloria had forgotten her cell phone. Then he had to pick up his own cake, because Cam had an unfortunate incident at the bakery. Finally, he had to go rescue Mitch and Claire from a scary dog, because they’d broken into their childhood home.

There are so many characters on Modern Family that I sometimes forget it’s Mitch and Claire who are siblings. But when we do get to see them interact, just the two of them, I’m reminded of how well they work together as brother and sister. Their idea to recreate a childhood photo was hilarious, if only because of their outfits. Mitch was in a sailor suit, Claire was dressed like a hippie. Or, you know, something. Anyway, they broke into the backyard of their childhood home to take the nostalgic photo, but soon got chased into a tree house by a big scary dog. I liked how they took the opportunity to air a few grievances about Manny – he got a dog, when they were never allowed to have one. And will it be fair if he gets a third of the fortune once Jay kicks the bucket?

Meanwhile, Gloria was off shopping with Lily because she’d been crying and driving Cam crazy. I loved how skillfully he pawned Lily off. When Phil ran into Gloria and Lily and realized that everyone was assuming they were a couple, he used the opportunity to one-up his college rival. Little did he know, the guy had actually had a big crush on Claire and had been jealous of Phil all those years. The “appreciate what you have” storyline could have been a bit cheesy, but I loved how Phil yelled “I’ve got Claire!” when both she and Gloria were about the fall into the pool. It was a nice throwback to the past, and it helped lighten what could have been a way too sweet storyline.

Even if I hadn’t read that Mitch and Cam were going to consider having another baby, I would have been able to tell because of how the episode played out. The exhausted couple complaining that they never should have had a kid because Lily wouldn’t stop crying was a sure sign, and once Cam had the opportunity to teach Manny how to throw a baseball, it sealed the deal. Cam wants a son. I was glad Mitch was the one who brought it up, though, since it seemed less obvious. After spending the day with Claire reminiscing about their childhood, he realized how great it is to have a sibling. Even if Mitch and Cam don’t end up with a second child right away (adoption does take a while) I’m glad they’re considering expanding their family. That said, it’s always possible the show could do a bit of a time jump – I read an interview somewhere where the showrunners said they’d consider replacing the babies who play Lily with an older, more animated toddler. (They’re not being mean, those twins might not want to be actresses!) Anyway, if that were the case and they did jump forward a little, perhaps we could see season three opening with Mitch and Cam bringing another baby home on a plane.

Cam had some delightfully funny moments in the episode, as he was bonding with Manny. The best, of course, was when he was coaching Manny on what to say to his crush over the phone, and it made him sound like a pedophile to everyone in the bakery. Cam is at his best when he’s accidentally causing a lot of havoc.

The video that Haley and Alex had been trying to make for their grandfather’s birthday was a great way to look back at the show’s second season. We saw everyone blow them off as they were on their way to do things we’d already seen, like put up signs about a speeding car or go to a hotel dressed as Clive Bixby. 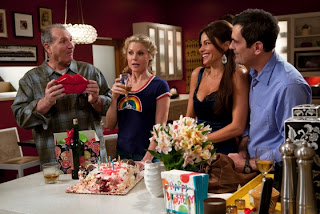 Jay’s birthday ended up being, well, a disaster. The video was terrible, he had to feed his favorite sausage to a dog to save Claire and Mitch, they drank his birthday wine, the cake Jay had picked up himself was ruined by the dog, and Gloria got him a “sexy phone” (shaped like lips) instead of a saxophone. And he never got to go fishing.

What did you think of the finale? While it may not have been the funniest episode ever – I think last week’s graduation episode was probably funnier – it was a great showcase for all the actors and characters. Now, check out my favorite quotes and I’ll see you next season!