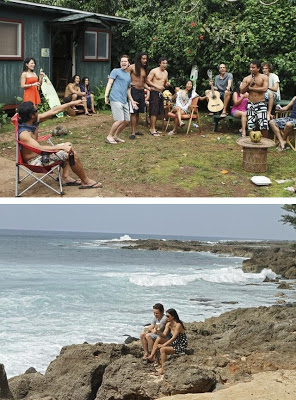 The season finale of Cougar Town was so good that I was willing to overlook the product placement that probably paid for the show’s trip to Hawaii.

I’m so sad that this show is being held for mid-season next year. Yes, I only started watching in January. And then it went on hiatus, which I hated. But I’m hooked! I don’t want to wait a whole summer for more episodes, let alone until 2012! And I’m dying to know what’s going to happen with Jules and Grayson.

So Trav moved to Hawaii to get his Forgetting Sarah Marshall on, and since the whole Cul-de-Sac crew had been contemplating a group vacation anyway, they decided to go get him. As someone who lives in a city that has had rain for 35 of the past 40 freakin’ days, I did not love their moaning over having to leave Hawaii to go back to Florida. Oh yeah, guys, because Florida is soooooo awful and no one likes it or vacations there. Anyway, I digress.

Seeing the gang all together in a new location was so much fun, and the writers really milked it. I mean, how could you not have fun with  the dreamer, the schemer, the queen bee, the damaged goods, the iron fist, and the one we all feel sorry for living it up in Hawaii? These people live like they’re on vacation all the time, so it didn’t feel like too much of a departure for them to actually be on vacation.

On a side note, did anyone else think that Grayson complimenting Jules’s island hair was a bit of a shout out to Monica and her humidity hair on Friends? It was, right?

I think my favorite part of the whole episode was how Tom creepily followed the crew to Hawaii and then lurked in the background until the very end of the trip. His fake surprise was awful, but his dance routine to Jules’s morning routine song were amazing.

Even though the whole point of the trip was to convince Trav to return to real life, Jules didn’t really make much of an effort to do so. I expected Bobby to want to join him in Hawaii forever, but I thought Jules would freak out more. Maybe it was because she knew it would only push him further away, or maybe it was because she had her own issues to deal with. In any case, I’m glad it was Laurie who took Travis’s lack of direction so seriously and convinced him to come home.

Since there’s always been a thing between Laurie and Travis, I liked that Laurie used that to get him to come home. It was mean, but it was necessary. She wanted to show Travis that he shouldn’t make decisions based on women, and she did that. Do you think they’ll ever hook up? How old is Laurie supposed to be, about 27? Since Travis is “almost 20”, which means he’s 19, it’s still weird. I’m not sure it would ever not be weird, yet there’s still part of me that wants them to happen as a couple. I find Travis less annoying when Laurie is around.

I liked how well this episode balanced humor and heart. Watching Bobby act as a “sugar kid” (surrogate) for Andy and Ellie was great – he did prissy, relaxing stuff with Andy and awesome, adventurous stuff with Ellie. The scenes were fun, but we were also reminded that Bobby is a bit lonely. This show hasn’t really incorporated new characters into the world – for example, I never really cared for Smith, and I hated Kirsten – but I have to say, now that Bobby has a little money I’d like to see him with a love interest.

What I don’t want to see is him back with Jules, although I really don’t think the show would do that to us. But is Jules going to be single again soon? At first, I found her relationship issues with Grayson to be very confusing. How could he pressure her to have a kid when they’re not even living together? And am I the only one who totally thought they were already living together? Yes, Grayson is looking into the future here. He wants to have kids, and needs to know that Jules is open to it. But buddy, the biological clock is seriously ticking on that one. Personal choices aside, the window of time where Jules is able to have a biological child is quickly closing, and that means other conversations about fertility drugs and adoption will have to take place. Call me old fashioned, but you might want to consider putting a ring on it before you get into all those discussions. It’s just that if Grayson wants to have a kid with Jules, he shouldn’t be so terrified of moving in with her.

Now, we also have to deal with the fact that Jules doesn’t want more kids. At the end of the episode she told Grayson she’d “go on any adventure” with him, which seemed to imply that she’d changed her mind. So are they going to have kids? Will it be a baby like Stan, that we never see? Realistic depictions of a conversation like this aside, I don’t want Jules and Grayson to have a baby. I think it would ruin the show. What would Pregnant Jules fill Big Carl with? Grape juice? Come on.

We’ve been left with a lot to think about before next season, and we’ve got plenty of time to think. So in the meantime, here are my ten favorite things about this episode: