Wow. I didn’t watch American Idol live on Thursday night because I like scripted comedies better than drawn-out results shows, but I did tune in in time to catch the final result. Like most of you, I. Was. Shocked.

My dad called me before the episode to get my prediction on who’d be going home. I said Haley – she’s my favorite thanks to “Bennie and the Jets” and “House of the Rising Sun”, among other performances, but she spent a good deal of time in the bottom three early on in the competition and I figured she didn’t have as strong a fan base as the other contestants. My dad’s prediction was Scotty (I wish…) and his girlfriend said Lauren. I thought “Gee, the only one we know is safe is James.”

In fact, I felt pretty confident that it would either be a James vs. Scotty or James vs. Lauren finale. And I’m not even a huge James fan – I think he’s really good, but I think he hits too many wrong notes and has a tendency to screech more often than I like.

I was interested to learn from a Couchtime reader that the website “Vote For The Worst” had told people to vote for Haley. I checked out the site and it seemed to suggest that this was more to do with the judges’ apparent disdain for her than any lack of talent. That’s what I hope, anyway, because I think Haley is incredibly talented. Furthermore, I’d argue that Haley has shown more growth and progression during her run on Idol than anyone else this season, and more than most people on any season. She has really improved, and the girl can sing.

Before I get to James’ untimely elimination, let’s talk about the actual show. I hated James and Scotty’s duet, mostly due to Scotty. The girls’ duet was pretty good, though. Lady Gaga’s taped performance was awesome. I take back anything negative I may have said about Haley’s performance a couple weeks ago – “You and I” is a fantastic song. I’ve heard it a couple times more since Haley covered it and I’m obsessed. In fact, I just downloaded Haley’s version since Gaga’s isn’t out yet.

I won’t talk about Enrique Iglesias because I’ve never been a fan and fast-forwarded through most of his performance. Time is short and I had better things to watch! I did watch Jordin Sparks’ performance, though, which was a little disappointing. I really liked her as an American Idol winner and thought she’d have a great career. She’s done OK, but the song she performed wasn’t my favorite. I’m still waiting for her to put out a really great song. Finally, there was the world premiere of Steven Tyler’s new video. It starts out looking like someone is picking his nose, and doesn’t get much better.

As much as I was disappointed with James being eliminated, I’m happy to see Haley and Lauren in the final three. How interesting that the only two girls left in the competition so early on would make it so far. I like them both a lot and am happy they’re in the top three. Obviously, I was really hoping that Scotty would be the one eliminated. I’ve never liked him and while I could admit he was talented early on, I’ve grown extremely weary of his schmoozy, cheesy, over-exaggerated, pandering one-trick-pony ways. 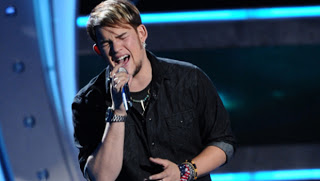 I felt bad for James when it was revealed that he was out. The kid looked absolutely crushed. While he may not have been the most gracious of losers (“I did so much stuff that’s never been done on this show before” may not have been the best thing to say, but I’m going to assume he meant performing heavy metal, not that his talent was the best we’ve ever seen) but the guy has overcome a lot of challenges in life, is a great musician, and deserves a lot of respect. I hope he finds a career in music and figures out a way to provide for his family.