Suck it, Simon Cowell. Or at least, that’s what American Idol seemed to be saying when they announced that 95 million votes came in this week – 15 million more than at this point in the competition last year. But I doubt it has much to do with the judges. The singers this year are younger and, as Elle Fanning reminded us, there are a lot of six year-olds out there voting for Scotty McCreery. I don’t think Lee DeWyze, Crystal Bowersox or Casey James would have caused such a frenzy with the kindergarten set.

We got to see the three contestants visit their hometowns this week. Haley was overcome with emotion to see so many people show up for her in Wheeling, Illinois despite the rain. It was cute to see her jam with the family band in front of the massive crowd. Scotty went home to Garner, North Carolina, where he was greeted by a mob of teenage girls and a few male cops. He did a bit of an ugly cry – OK, he ugly cried quite a bit – and then broke into his signature babylockdemdoorsandturndemlightsdownlow.

I knew Lauren’s hometown visit to Rossville, Georgia would be the most emotional because of the tornadoes that recently flattened parts of the South, including her town. It was a bit heartbreaking to watch Lauren’s face as she viewed the destruction for the first time.

Midway through the show, a trio of Italian boys showed up to sing. Think the Jonas Brothers meet Il Divo, only shorter, uglier, nerdier and, well, worse. It was the cheesiest thing I’ve ever seen in my life. It was terrible. The one in the Sally Jesse Raphael glasses looked like a very short 35 year-old man in a toupee posing as a teenager. Jimmy Iovine has signed these people? He should be ashamed of himself! 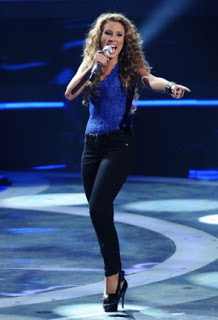 Ryan announced that Scotty was safe, which we all pretty much knew. This kid might win it, and that disgusts me. I really wasn’t sure which girl would get eliminated. I thought it might be Lauren going home, but I wasn’t surprised when Ryan announced that Haley was out. I have to say, I’m disappointed. I rarely buy Idol tracks on iTunes, but I’ve purchased three of Haley’s. I really like her, and I hope she actually manages to get a career out of this. I also loved how she milked her last few moments of Idol glory on “Bennie and the Jets”.

All that said, I’m glad Lauren is still in and I hope she wins. I think she would have been more crushed than Haley if she’d been eliminated because I think she wants this more than everyone else. I hope all of Haley’s votes go to Lauren so that she can beat Scotty in the finals next week. The youngest final two ever! Who will you be rooting for?