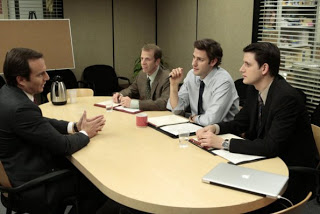 Last night’s season finale of The Office worked for me, for a number of reasons. I felt like a lot of people in the office got their moments to shine – Pam doing whatever it took to occupy Creed’s time and prevent him from running the company into the ground; Dwight trying desperately to be re-considered for the manager position; Jim almost cracking under the pressure of selecting the new manager; Gabe’s self-destruction; Andy and Darryl’s bids for the top job. Everyone got something to work with, and it gave me hope that this show can work as an ensemble comedy without Steve Carell.

You could argue that the hour-long episode was a mere parade of stunt-casting, but I know what they were trying to do (keep ratings up) and I think it worked. If you’re going to have stunt-casting, I think this is the way it should be – brief appearances, all in one episode, that are very funny. I liked seeing the endless stream to wackjobs applying for the job, because it felt natural for this show. Hiring is a tedious process. In fact, I’m surprised The Office hadn’t really delved into the frustration of having to hire someone new before.

There were a few inside candidates for Michael’s gig. Darryl, who thought he was a shoe-in because of his good rapport with everyone in the office, his relationship with Jo based on one good idea, and his minority status. And it seemed like a part of Jim definitely wanted to hire Darryl, but the guy didn’t even have a resume and struggled to answer basic questions during the interview. Then there was Andy, who didn’t really want the job but felt like he was obligated to go for it, since that’s what Bernards do. He looks good on paper – he’s Cornell educated, after all. If Andy’s character wasn’t so similar to Michael’s I’d say he’d be a good fit for the job, and I think he’d be funny, but Andy Bernard and Michael Scott have too much in common for it to work. And then there was Kelly, who was immediately brushed off as “not a serious candidate” by Gabe, who was the worst interviewer ever.

Then there were the outside candidates. Will Arnett was very funny, but a bit forgettable. I thought Ray Romano was hilarious as a self-destructive schmuck. James Spader was even funnier as a creepily confident jackass who felt way above the job he was applying for. Catherine Tate was also funny as a candidate who kept throwing outrageous ideas around, like doing away with job titles, or letting everyone have the ability to fire someone beneath them, or having a zen office where everyone works on the floor. Ricky Gervais’s appearance as David Brent was also funny, and I was glad they saved Jim Carrey for the end. I like him in small doses, and he was funny as the guy Jim had referenced earlier who just kept asking about his vacation in Finger Lakes.

Then of course, we had Dwight still trying to get the job. I like seeing Dwight desperate, and things got even funnier when Toby and Kelly (who was put on the search committee after Jo demoted Gabe) took his bribes and tried to recommend him for the job. Jim was the only one taking it seriously, which was ironic since he takes so few things seriously. But there was a lot of pressure on him – Jo was counting on him to make a good decision, and I thought John Krasinski did a good job of showing the stress. I liked the little moment outside where Jo’s trunk door bumped him out of the way.

Outside of the interviews, there was still a lot going on in the episode. Angela got engaged to the state senator, and now everyone knows that he’s gay. They decided not to tell her, but I’m sure this won’t be the end of it. I really like Angela as a snooty bride, too. And Jo sent Gabe back to Florida after realizing that he’d gotten too involved in the office’s social scene – i.e., he’s still in love with Erin and therefore couldn’t consider Andy as a candidate for the job. I’m glad we won’t be seeing as much of Gabe. I really want to see Erin and Andy together, and his desperate pleadings for Erin to take him back were getting kind of old. And the stuff with Pam and Creed was just comedy gold.

What did you think of the season finale? Do you think we met the new boss? Or do you think someone from within will get it? Will Jim spend the rest of his life defending the decision to angry co-workers? Now, check out a few of my favorite quotes from the episode, and see you next season Office fans!

The Office: Who's the Boss?
https://haligonia.ca/the-office-whos-the-boss-38124/