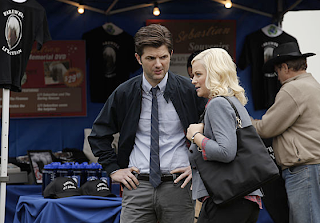 Parks and Recreation wrapped up its third season with two episodes on Thursday night – “The Bubble”, followed by “Li’l Sebastian” – and I have to say, I think this season might be one of the best seasons of a comedy ever. I have a feeling that when the end of the year comes and I’m looking back on 2011 in TV, I will remember that Parks and Recreation had a hell of a year. That every episode was fantastic. Thank god the episodes are all saved on my computer, because I don’t think I could wait for this to come out on DVD before I re-watch them.

In “The Bubble”, Ben and Leslie faced the first hiccup in their secret relationship – Ben met Leslie’s mom. I love Ben and Leslie are so smitten with one another that they’re doing a terrible job of keeping it a secret. These are people who normally would be able to separate the personal and the professional no problem, so it’s cute to watch them kind of flounder like that.

First Leslie panicked when she found out that Ben had a meeting with her mom. I love when Leslie’s mom comes up on this show because she always throws Leslie for a loop. First Leslie told Ben that the other Knope was a Filipino woman of no relation, and then she dropped the mother bomb on him right before the meeting. He went in all jittery and nervous, with coffee all over his shirt, and made a terrible first impression. So Leslie coached him for his second meeting, and he went in strong. So strong that the senior Knope made a bit of a pass at him. So Leslie and Ben came clean, and Leslie’s mom promised to keep her lips sealed in exchange for Ben approving two new school buses. The entire exchange was perfect.

Meanwhile, Chris was making lots of changes around the Parks Department. I loved, loved, loved this because Ron and Chris are such dramatic opposites. The giant, circular desk that Chris set up for Ron in the middle of the office? Amazing! Literally the worst work station imaginable. And he gave everyone roles they would hate. Jerry was in charge of PR, even though he’s terrible at interacting with people. Tom was sent up to the infamous fourth floor to interact with weirdos and old people. April was given – gasp! – more work, as she was “promoted” to being everyone’s assistant. Barf. The only one who seemed happy was Andy, who was temporarily reassigned from shoe shining to help Tom with the creepy fourth floor project.

Ron’s compromise for the whole thing was hilarious, too – everyone went back to normal, and in exchange Ron would spend one week at the horrible swiveling desk. That, my friends, is an honorable sacrifice.

Next, in “Li’l Sebastian”, we lost the pride of Pawnee. Yes, everyone’s favorite mini-horse kicked the bucket. I think my favorite part of this might have been the emotional spiral it sent Chris into. It was such a vast difference from his usual go get ’em attitude, especially considering how Gung-ho he’d been about the changes in the first episode. Chris started panicking about his health after being diagnosed with tendinitis, and the doctor blamed it on his age. That’s a scary thing for someone who plans on living to 150 years old. The passing of Li’l Sebastian made everything even more upsetting for him. Luckily, though, it was an opportunity for Ann and Chris to become friendly again. Now that Ann works at City Hall part time, I’m looking forward to seeing how they’ll interact. I, for one, wouldn’t mind seeing them get back together at some point. Maybe it could be a catalyst for Chris to do away with his rule against dating?

Speaking of that rule, is it ever getting in Leslie and Ben’s way. Now Ann, Leslie’s mom, Ron and a maintenance worker all know about the “secret” romance. And let’s talk about the big twist at the end of the episode – a somewhat creepy search committee approached Leslie about possibly running for office – as a councilor, or maybe even as mayor. And she can’t have any skeletons in her closet. If this makes her break up with Ben, I will be incredibly disappointed. If some sort of crazy scandal breaks out, I think it will be hilarious. So let’s all cross our fingers for a scandal.

Leslie will likely have to leave her job to run, though, and how would that work? You can’t have a Parks Department without Leslie Knope! Will she lose and then try and return to her old gig? As it is, the department is already down an employee – Tom handed Ron his letter of resignation at the end of the episode. This was a terrible decision for Tom as a person, but a great development for Tom as a character. Pawnee does not need a high-end entertainment conglomerate. It is the worst idea ever. And I love it. Plus, he just sold his shares for the Snakehole so that he could continue being a government employee! What a terrible idea!

The funeral for Li’l Sebastian was appropriately hilarious and disastrous, and anything that ends with Ron Swanson scorching off his eyebrows and most of his mustache is good in my book. Plus, we were left with one more cliffhanger this season – Tammy 1.0 is back. It was great to see Megan Mullally drop in as the Tammy we all know and fear, but I’m dying to know what the original Tammy is. If she sent Library Tammy running in fear, then she must be a piece of work.

So we’re left with the return of Ron’s scary ex-wife, Tom’s resignation and a possible career in public office for Leslie while her relationship with Ben hangs in the balance. I don’t know about you, but I can’t wait for next season.

The two episodes were so packed with jokes that I won’t possibly be able to list all my favorites, but here’s a smattering, in no particular order: