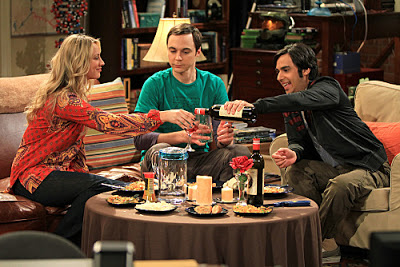 The Big Bang Theory did a fantastic job of freshening up the show in it’s fourth season by adding Bernadette and Amy as series regulars. In Thursday night’s season finale, they shook things up even more.

The big news? Penny drunkenly slept with Raj, and everyone knows about it. Relationships have changed, and I can’t wait to see how this plays out next season. “The Roommate Transmogrification” could be a lesson in how to produce a great, comedic season finale. It was hilarious, it propelled characters forward, and it left a few things up in the air for next season.

Let’s talk about Howard and Bernadette first. This was one of my favorite storylines just because it was so funny. Bernadette got her PhD and was head-hunted for a fancy, high-paying job at a pharmaceutical company to boot. Cue lots of doctor jokes at Howard’s expense. What I liked was how cool Howard was about it at first, stressing how proud he was of Bernadette rather than heading right for jealousy. Of course, when Bernadette bought him a fancy watch and started treating him like a trophy wide, he was bound to feel a bit emasculated. They got in a fight, and he ended up going to Sheldon’s – but more on that later.

Meanwhile, Leonard and Raj did a bit of a switcheroo after Raj grew tired of Leonard having nerdy role playing sex with his sister. Can you blame the guy? So he and Leonard agreed to swap living situations for a while, and after an immense amount of paperwork, Sheldon was OK with the idea as well. I think my absolute favorite part was the way Raj set up a candlelit dinner for Sheldon – it’s the difference between eating and dining.

While Leonard was staying with Priya, the touchy subject of when she’d tell her parents about him came up again. Then when Leonard overheard Priya talking to her parents about coming home in a month, he freaked. Not only was Priya busted, but Leonard is heartbroken – how could she not tell him she was only going to be in California for one more month? They had a fight, and he too ended up at the old apartment…

…where everyone discovered what had happened between Penny and Raj. What I loved about this was how believable it was. They’d both been drinking a lot of red wine. Penny was feeling vulnerable, talking about how she’d screwed up in dumping Leonard. Raj was feeling vulnerable about dying alone and Penny told him that if they weren’t friends she’d totally go for him. It was inevitable. Obviously, Penny regretted it the moment she woke up beside him, naked, in Leonard’s bed.

Penny told Raj, who was speechless both from lack of alcohol and probably shock, that it had never happened and she tried to sneak out of the apartment. But Leonard had slept on the couch and Howard had shown up after fighting with Bernadette, so everyone was there to witness her walk of shame.

I can’t wait to see what happens with all of this next season. Raj will never let Penny forget it, and even if Priya does go back to India, it will likely be an obstacle in the way of her reunion with Leonard. The Leonard/Priya relationship has had some funny moments, but I’m ready for it to end. I’m much more intrigued by the idea of Leonard having to deal with the fact that Raj slept with his girlfriend. And what with Howard and Bernadette’s marriage and more hilarious Sheldon/Amy video chats, I think we have a lot to look forward to.

What did you think of the finale? And as always, check out these highlights: