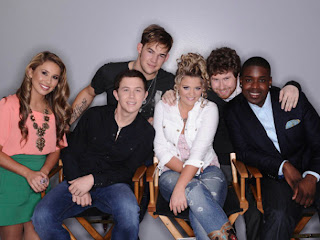 I know it’s hard to get excited about Carole King night on American Idol, but she really has written a lot of great songs. I really enjoyed this week’s episode because of the duets – have they always done duets in the final six? As we’ve seen from the results shows, some of the contestants have really great chemistry. It was fun to see the regular performances as well as the duets. So, let’s talk performances:

Jacob Lusk – Oh No, Not My Baby
I’m so over Jacob that I think instead of critiquing his performance, I’ll just discuss his outfit! Adorable! If you mute the TV and squint your eyes so you can’t see his facial expressions, he’s super fun. No, I kid. Jacob was sort of tolerable this week. If he knew how to turn this cheese off for more serious songs, I could handle a performance like this once in a while. But, you know. He can’t.

Lauren Alaina – Where You Lead
Gilmore Girls! The Girlmore Girls theme song! I love this song! A lot! Lauren is just adorable, and I loved how excited she was over meeting Miley Cyrus. Her performance was fantastic, fun, youthful and sweet. I think Lauren could win this whole thing.

Haley Reinhart and Casey Abrams – I Feel the Earth Move
I was so glad that Haley and Casey were singing together, first of all, and even happier that they performed this song. They have phenomenal chemistry together, their voices perfectly suit each other and it was a fun, sexy, energetic performance.

Scotty McCreery – You Got A Friend
I love this song, and as Scotty performances go, it was OK. Shall I leave it at that?

James Durbin – Will You Still Love Me Tomorrow
I’d be hoping Haley would do this song (see below), but it was a really interesting choice for James. And, I absolutely loved what he did with the song. I like James best when he strips down a song, and the a cappella opening was brilliant. I did not love the last note, and I’m still not sure he has a broad enough appeal to win.

Lauren Alaina and Scotty McCreery – Up on the Roof
I always like Lauren and Scotty’s duets despite Scotty, and this one was no different. Lauren was fantastic and Scotty was…also there. I refuse to judge him at this point because all I can say is that he’s not for me. Even all J.Lo could muster was that he did a nice job of backing up Lauren.

Casey Abrams – Hidey Ho
I don’t know this song, and I’m worried that Casey will alienate voters with these lesser known songs. It was a classic Angry Casey performance, and although he’s very good, I’m not sure it’s what sells on American Idol.

Haley Reinhart – Beautiful
I’d sort of been hoping Haley would do Amy Winehouse’s version of “Will You Still Love Me Tomorrow”, but this was really good. In fact, I loved Haley’s performance – I thought the song was great, she sang well and looked beautiful. I still think “Bennie and the Jets” is my favorite performance of Haley’s, but now that she’s found her niche I think Haley brings something really special to the table.

Jacob Lusk and James Durbin – I’m Into Something Good
This was an odd pairing, but it was really the only option. Haley and Casey go together. Lauren and Scotty go together. And it’s not that I think rock and soul can’t go together, because there’s lots of examples of that. It’s that I think James and Jacob are both overdramatic and I thought they’d argue for the spotlight the whole time. In a way, they did – but they turned it into an endearing schtick. It wasn’t an outstanding performance, but it was far better than I expected.

It’s hard for me to rank the performances this week, because I thought James, Haley and Lauren were all great. And I don’t really care about Scotty or Jacob. But here goes: