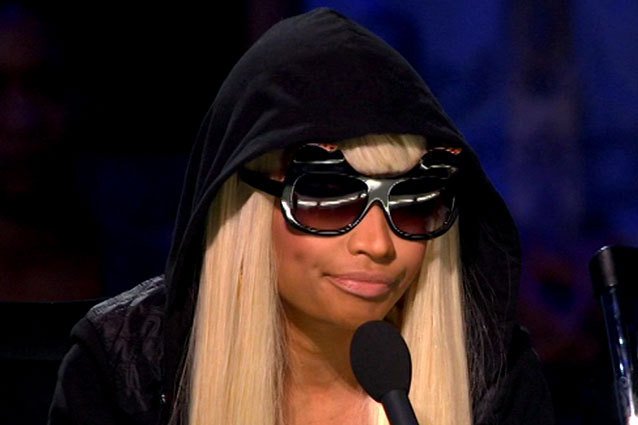 Really, Minaj? “Stuck in traffic” on your way to a live show? You had one job! Nicki Minaj was late for Idol‘s first live show on Wednesday night, and then she showed up in sunglasses and a hoodie.

That said, Nicki continues to the the one judge that I actually pay attention to. She’s opinionated without being mean, she doesn’t care about the incessant booing, and I often agree with her.

This week, the Idol top ten were singing songs that had been previously performed by an Idol winner. I often whine that songs are overdone and should be retired when this happens, so it’s nice to see that American Idol is really embracing everything I hate. Way to lean into it, guys.

Curtis Finch Jr. – “I Believe”
This song. Oh. Well, that was a great way to embrace the churchy vibe that will get Curtis nowhere on this show. I also didn’t think the performance was vocally great, but I’ve never been a big Curtis fan.

Janelle Arthur – “Gone”
This isn’t a song I know or really care for, and I found myself wishing that Janelle had done a more fun Carrie Underwood song. But, she doesn’t really have Carrie’s vocal chops, so perhaps that would’ve been a mistake. Still, I didn’t really care for this. Very karaoke.

Devin Valez – “Temporary Home”
This is a really beautiful song, but for Idol I think it’s a little too slow and dull. Devin’s version came across much cheesier than Carrie’s, and overall the performance was weak and forgettable.

Angie Miller – “I Surrender”
I think Angie was smart in choosing a song that Kelly did back in season one, and hasn’t been done a lot (if at all?) since. There were less comparisons, and I appreciated Angie’s performance. Unlike Jimmy Iovine, she doesn’t strike me as a beauty pageant singer – sure, some of her movements are a bit pageanty. But she has more depth than what you see on Miss USA, more of a Vanessa Carloton vibe (but with a bigger voice).

Paul Jolley – “Amazed”
Another song I hate that Scotty McCreery sang. Thanks for nothing, Scotty! Yawn. This performance, like Paul himself, was dull.

Candice Glover – “I (Who Have Nothing)”
I really like Candice, and I love this song. I was a little worried because I really liked Jordin Sparks’ cover a few years ago, but Candice was also fantastic. She is obviously the best singer in the competition, but if history repeats itself she’ll probably place fifth or so.

Lazaro Arbos – “Breakaway”
This is a lovely song, but unfortunately it was too big for Lazaro. He seems in over his head at this point. His voice isn’t big or interesting enough to warrant him being in the top ten, and I hope he isn’t simply voted through each week out of pity. He drowned in this song.

Kree Harrison – “Crying (Over You)”
The clip of Carrie Underwood singing this song reminded me of how great she is, which isn’t a good place to begin a performance. Kree was also very good, but there’s still something about her that I find a little bland. I think she’s lovely, but she has yet to be exciting.

Burnell Taylor – “Flying Without Wings”
I find Burnell endearing. I like his weird 90s clothing and his hipster glasses. I think he’s talented. But I didn’t love this song – like many of the other performances this week, I thought it was kind of boring. Can’t anyone on this show have fun? Sheesh.

Amber Holcomb – “A Moment Like This”
Of all the Kelly Clarkson songs, really? This? Sigh. The arrangement was weird, and the song was never great to begin with. Which is too bad, because Amber herself is a great singer and very beautiful.

The last four were all pretty bad – Paul Jolley, Devin Valez, Lazaro Arbos and Curtis Finch Jr. could all go home this week and I wouldn’t mind a bit.

These kids are going to have to work on their lip-syncing skills if they want to pull off these dreadful group numbers.

The two sixth-place finishers from each gender group got to perform for one more spot on the American Idol tour. Charlie Askew went first, singing “Sky Blue Diamond” at a piano. It wasn’t as awkward as his previous performance, but the song was brutal (he wrote it) and his voice sounded thin. Next, Aubrey Cleland sang “Out Here On My Own”, a song I love. I really liked Aubrey and hoped she’d make the top ten, and I wish that this were a vote to get back on the show. Aubrey’s not the best girl, but she’s better than every dude that made it through this season.

This season, we actually get to know who the top three vote-getters were. This week, it was Candice, Angie and Kree. All good news. The bottom two was Curtis and Devin, and Curtis Finch Jr. was voted out.

The internet basically reported that Nicki Minaj had a tantrum, and I thought they blew things out of proportion. She jokingly threatened to quit when Curtis was in the bottom two, and walked away from the judges’ table when it was announced he’d been voted out. (What was she wearing???) Curtis is probably very nice (the other contestants looked upset, I’m sure he’s very well liked) but that last performance was awful. He overdoes it times a million, and it doesn’t sound good.

The other judges voted not to save him, because come on. You don’t waste that on week one. The judges weren’t unanimous and Nicki was annoyed that they didn’t have more time to discuss it.

What do you guys think? Did the right person go home? Should Curtis have been saved?