You know, I’ve always found an awards show that’s sponsored by Dick Clark Productions to be rather suspicious. But what do I know – I’m just here to bitch and make you smile. Speaking of people who are taking up space, what the hell is going on with this ‘exclusive’ red carpet? 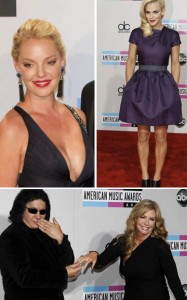 I hear if Heigl’s breasts aren’t exposed to camera flashes every 90 days, they start to rust.

Is Katherine Heigl still a thing? I mean, I get Gene Simmons and Shannon Tweed; after their public bust-up on Joy Behar’s show, they’re like white hot. Based on this guest list, without actually knowing anything about the AMAs, one could assume that it’s a free buffet for people who don’t have jobs, but manage to maintain exorbitant amounts of cash money. How else could El Puta Loco, Jenny McCarthy, manage to afford one of Vicky B’s gowns? It’s a super cute dress in a gorgeous shade of purple, but it ain’t cheap. Mrs. Becks has to charge – she gots kids to feed, yo.

As far as ‘Best Dressed’ goes, it’s always a bit of a stretch with an awards show, unless it’s the Oscars of Golden Globes, but I did spot a few standout ladies. Specifically, Canada’s own Alanis Morisette, who looked lovely and understated in her black flowing ensemble. See, this is how you do short-in-the-front on a dress. The rest of her body is framed and kept a mystery while Alanis shows just enough leg to attract the right kind of attention – the sexy kind. 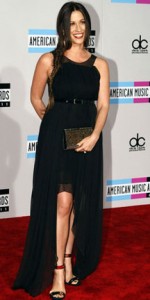 For my other Fashion Hit (as it were), I’ve gotta go with T. Swifty-baby. Did girlfriend send a memo to Beyonce and say, “Are you coiming? Cuz’, I’m-a wear gold. But I still support awareness!”. Say what you will about her, Taylor Swift is a Glamazon to the max, and super pretty. And a giant apparently, so she’s got that to fall back on if there’s a country music backlash. 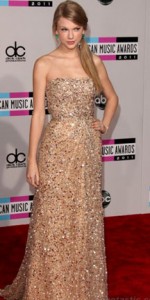 Don’t look directly in her eyes – it’s too adorable for most retinas.

So… Biebs. Oh Biebs. what the hell? The slick hair and maitre’d look is pretty, umm, well it’s a niche market, huh? I mean, Baby’s First Nip Slip is your date and you come looking like a lesbian stand-up comic from 1986. “Laides, amiright”? Naturally, I swapped your head with one of Vancouver’s favourite lesbians and, well, I’ll let y’all be the judge of what’s what. 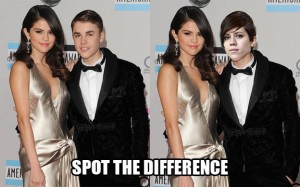 How do they get their hair to do that ‘flippy’ thing!?

I suppose Gomez was too busy hitting puberty on the red carpet to realize she had shown up with the cutest girl in town. Otherwise, poor J-Hud would have had her eyes clawed out. It’s bad enough they had to deal with Heidi Klum wearing aluminum foil, but now these bitches have to play nice?’

“Oh, good luck tonight! I love your shoes!”
“Thanks! You too, your hair is fantastic!”

Seriously, just call each other fat and call it a day. 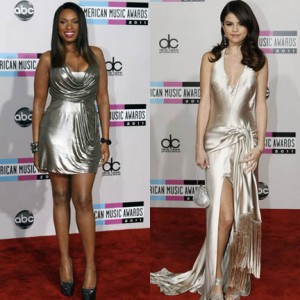 But only one can be used as a flotation device. Guessing makes it more fun!

Man, even after Biebs brought down the house (and scored a few offers of adoption on the red carpet), he still had to entertain the masses. Going from what seemed to be a velvet tuxedo to the stage must call for some kind of work out gear, right? Or, a white leather jumpsuit made from the hides of failed 80s stock brokers. Does this kid even have a wardrobe department anymore, or is it some drunk, colourblind hipster who’s only allowed to shop at ‘Hot Topic’ and ‘Urban Outfitters’? 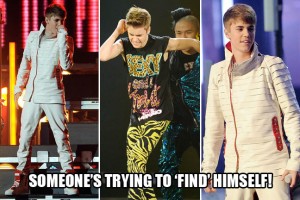 He has to be a closet alcoholic. He HAS to.

Latching onto LMFAO’s performance to show off your shufflin’ steps while wearing tiger AND leopard print – I mean, what kid’s dream are we trapped in? Is this ‘Groundhog Day’ with a kid who’s always wanted to be a pop star? I just don’t get it anymore!

Finally, we have Jenny From The Block. Oh, remember the days when Jennifer Lopez would make a headline just by wearing the wrong colour, let alone a fishnet gown? Well, Jennifer Lopez does, and she can’t seem to let go of the glory days. It’s not that people don’t care about her anymore but, when your competition is Gaga and Nicki Minaj, you’ve got to do more than wrap yourself in some expensive ivy. Some might say she looks elegant – I say this dress smacks of “NOTICE ME I’M SEXY!!!” appeal. 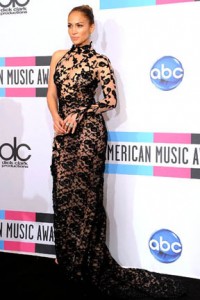 She’s still Jenny From The Block, yo! What? You want her autograph? Umm, she has people for that – don’t ask her directly.

Although, I did love J.Lo’s costume change for her performance: 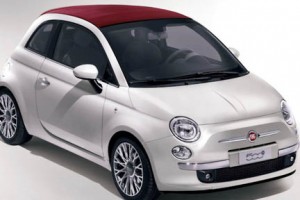 And she gets 42 miles to the gallon when she’s not on stage!