Sqeeeeeeeeeeeeeeeeeeeeeeal! Time for the Top Model girls to move into their house in Venice Beach! It looks like it’s made of mirrors, which is fitting for a house filled with wannabe models.

The girls got to know each other quickly. Chris, bless her heart, tried to make small talk with Ann. Ann told Chris that her dream man would be a sixty year-old, fire-breathing, sushi-making warlock. Kayla told the girls that she’s a lesbian, and then she told the camera that she wants to win because there’s never been a lesbian ANTM champion. Come on. It’s not like being a lesbian prevents someone from winning. What’s next, “I’d really like to be the first ANTM winner from Arkansas”? 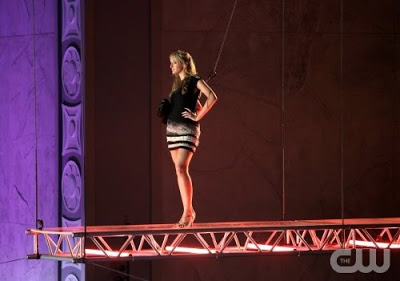 The girls faced their first challenge right away – walking a sky-high runway in a Diane von Furtsenberg show. It was pretty intense. I don’t have a fear of heights, but that flexing runway looked scary! Of all the girls, I was hoping Anamaria would fall – and she did! It was at the end, so she didn’t make a fool of herself or ruin her performance, but it was enough. She managed to annoy me within the first few seconds of the episode – I hate girls who are so arrogant so early on in the competition. The girl I was most worried would fall was Kacey. She couldn’t see without her glasses, but she rocked it nonetheless. How about you get her some contacts during makeover week, OK Tyra?
No winner was announced, and no prize was given out – is this a new thing for ANTM? I also noticed less catty arguments in this house this week, and more photoshoot footage. If this is what the new, high-class ANTM looks like, so far it’s working. The episode flew by.
Sticks and Stones
The photo shoot this week was pretty fun. Mr. Jay introduced it wearing a T-shirt that said “Band Geek” and then he pulled it off to reveal a T that said “Creative Genius”. All the girls were to choose a negative word that they would shed. Tyra showed up to share her classic words of encouragement with a T-shirt that said “Big Forehead” and then revealed another that said “Model Turned Businesswoman”. Just in case, you know, you missed last week’s episode (or every other episode of ANTM ever) where Tyra told the story about how before she was a sexy supermodel she was an awkward kid. 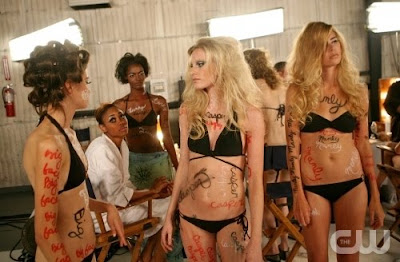 The best part of this shoot was that I learned lots of new words to use when making fun of the model wannabes…just kidding! Sort of. Esther chose “weirdo”, which kind of seemed like a cop-out. Everyone gets called a weirdo at some point. Rhianna chose “stupid”, Lexie chose “elf ears”, and Kacey chose “oreo” because people used to make fun of her for “acting white” (a pet peeve of mine).

Jane chose “big head” as her bully word, and then chose “big square face” as her power word. Umm…perhaps she should have been the one painted with stupid? Pretty sure her negative and positive words were almost exactly the same. Terra’s word was “soup cooler” because of her big lips (never heard that one before!) but maybe she should have chosen “crybaby” – she teared up at the first sign of criticism.

Liz’s word was “mutt” and she seemed to rock her shoot. She’s one of my early favorites. Ann’s word was “giant”, but it should have been awkward. Chris’s word was “bony”, but that should have been saved for the next girl, Anamaria. “Bucktooth” was her word? Try “bitch”. Seriously, that is one bitchy girl. She’s also WAY too skinny. When Jay told her to look softer she said she was trying so hard to “get lean”. Um, what? The look on her face when Jay told her that she did not need to get lean was priceless. And kind of sad, in a way. But because I hate her, I liked seeing her shaken.

Kayla had the most emotional shoot, since she’d chosen “queer” as her word. It seemed to come across in her eyes too, and I expected a great photo from her. Then Demi showed up to talk about how she used to get bullied (I half expected her to bring up Miley Cyrus) and that was a wrap!

Dreckitude?
I liked the “Backstage Pre-Panel” footage that we got to see. It felt so exclusive! I didn’t love Tyra’s dress at panel, but her hair and make-up looked phenomenal. Plus, Diana von Furstenberg! Love her. And it was so refreshing to have her on the panel. In past seasons they would have just had Demi Lovato stick around.

Lexie: Elf Ears/Unique
I loved Lexie’s photo. I wasn’t sure what to expect from her, but her face and pose looked great.
Kacey: Oreo/Nubian Queen
I liked Kacey’s photo, but I didn’t like that you couldn’t see her face very well. Still, I like Kacey’s look in person and I think she has potential.
Jane: Big Face/Big Square Head
Again, why were her two words the same? Her photo was decent, and I can definitely see potential.
Kayla: Queer/Free
I loved loved loved her photo. She squeaked out an explanation for the judges on why the shoot was emotional for her, but the photo did the real talking.
Liz: Mutt/Biracial Beauty
Loved it. How hot is she? I find her very different and strong looking. Her photo was tough and beautiful at the same time.
Esther: Weirdo/Independent
That body!! Esther is gorgeous, but her photo was awkward.
Kendal: Lanky/Fierce
Weak words, weak photos. Kendal has a strong face and an amazing figure, she should have delivered more.
Sarah: Manly/Athletic
Sarah looked so amazing on the runway, but her photo looked very amateur.
Terra: Soup Cooler/Luscious Lips
I didn’t like Terra’s shot. I wanted to, but there was something about the way she pulled her strap away from her body that felt very MySpace profile pic.
Chris: Bony/Slim
Chris’s photo was better than her sister’s, but it was still only average.
Chelsey: Casper/Fearless
I didn’t remember Chelsey’s shoot. In fact, I barely remembered Chelsey. But that was one damn good photo.
Rhianna: Stupid/Undefineable
Again, I thought Rhianna looked ugly in her photo! Why are her photos always shot looking up her nose? Disappointing.
Anamaria: Bucktooth/Sexy Mouth
Damn. I wanted her to have a terrible photo, but it was actually OK. Tyra revealed, however, that she’d chosen the photo because it was the only one where Anamaria didn’t look grotesquely skinny. OK, she didn’t put it like that, but whatevs. Point is, she was right.
Ann: Giant/Amazon
Wow! I did not expect Ann to produce such a phenomenal shot. The girl in the photo looked nothing like the girl standing in front of the panel.

So who deserved to go? I wanted Anamaria out. She’s too skinny, too arrogant and too annoying. But would that be enough? There were girls with weaker photos, like Esther, Kendal, Sarah, Terra and Rhianna. Who deserved to be called first? Kayla – but Liz, Lexie, Chelsey and Ann also had fantastic photos. 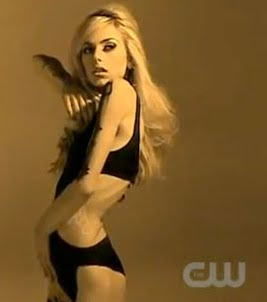 And best photo went to…Ann! I liked Kayla’s better, but Ann had a great shot. The other girls got called one by one, until it came down to Terra and Anamaria. In the end, Tyra did the right thing – she gave Terra a second chance and sent Anorexic Anamaria home. There are a bunch of reasons not to feel bad for Anamaria. She’s a bitch. She admitted that she used to be heavier/healthier and is on a calorie restricted diet, so her body is not naturally skeletal. Tyra sent Anamaria packing with the advice to eat some avacado. Do you she made the right choice?

Next week is makeover week! My favorite! I can’t wait to see what Tyra will do to the girls and which ones will cry.