Costco has ended it’s partnership with American Express in Canada, Dec 31 is the last day that Costco Canada will accept AmEx. They have entered a new agreement with CapitalOne and starting January 1 Costco will accept MasterCard.

There is another consignment shop opening in the Spring Garden area. East of Montreal, focusing more on dresses, will be above Sun Room on Brenton St come October 1.

Both WestJet and Air Canada both announced they will start charging $25 for the first checked bag. This is already a common practice on US carriers and it is a nightmare of people trying to jam”carry on”in the overheads.

Sully’s Roast Beef, posted on twitter that the business is for sale,andpatrons have found the doors closed in the last week when visiting during “open” hours.

Mezza Kitchen said that they will be announcing a new location on Monday,and its not theoneat Scotia Square food court. 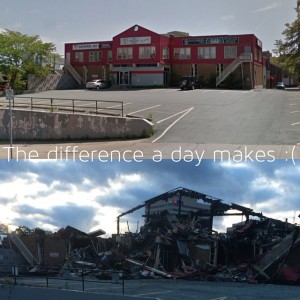 A few new things happening on Quinpool. Shawarma Stop has popped up where Extreme Pita was , and across the street where Halifax Cycle was is now the DeckBox, a Pokemon, Magic and YuGiOh shop.

Also on Quinpool, Beads R Us are starting their liquidation as they are closing up the business.

Maritime Pasty makers of tasty donuts and Cornish pastys in the Seaport,announced that the weekend of October 4th is their last, they lost their commercial kitchen at he Forum due to renos and have decided to follow their family to Toronto.

The Seahorse is officially moving from their Argyle St home to the basement of the Marquee on Gottingen. I reported this at the beginning of August but at the time it was denied with the vague statement “The Seahorse will never close”. Well now its a reality, but you cant move an icon! Over the last 25 years the Seahorse had already morphed from its original roots as just an underground dive to it’s current self as a concert bar. Moving it does not make the new location The Seahorse, the seahorse is those rounded doors on Argyle St. You can’t put the 78th Highlanders on Geiser’s Hill at the transmission towers in Fairview and call it the Citadel, it just doesn’t work that way. I look forward to having the new venue in my neighbourhood but I think its silly to call it the Seahorse. 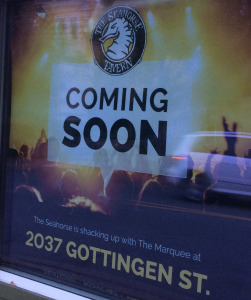