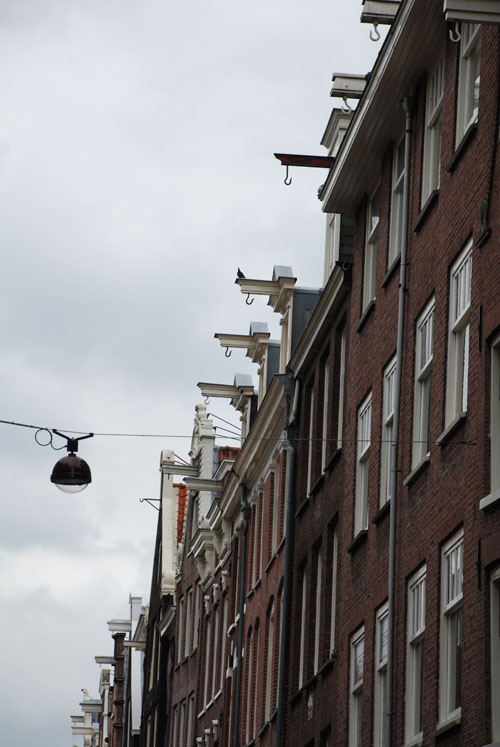 At a canal-side patio enjoying a Kriek

Amsterdam is probably one of the least likely places I thought I’d be taking a vacation based on the limited information I knew about the city. You know, what with the Red Light District and the not-quite-legalized cannabis. We’re more of the historic and cultural sites, yummy foods and tasty beverage kind of travellers.

So, how did we wind up spending four days there? Seat sale. Yes, the lovely people at Icelandair made us an offer we couldn’t refuse. Our original plan was to spread our vacation around BeNeLux, primarily in Belgium but the airfare made all the difference. Since we were flying into Amsterdam anyway we decided to look into what the city had to offer.

For one: art. The Rijksmuseum is currently restoring the main building so Dutch masterpieces by the likes of Rembrandt and Vermeer are on display together. Not “The Girl With The Pearl Earring”, which we found out after is in the Hague. At a cost of € 12,50 it’s a lovely way to spend an afternoon. 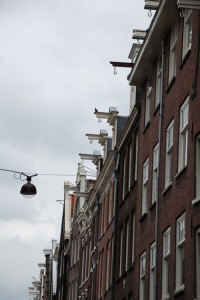 Amsterdam also has beer: namely Heineken. Since it’s just around the corner from the museum, and we were thirsty, we decided to pop in. Not as grand as the Guinness brewery which we toured on our trip to Ireland last year, it still provided an hour or so of beer history. Plus, two glasses of their finest were covered in the cost of admission.

The most entertaining part of the tour was a sort of virtual reality “ride” in which you are the beer from scratch to bottling. There’s also a green screen in front of which you can sing Karaoke and send a video card home to friends. You know, if you’re into that sort of thing. (The rest of the food and drink experience I’m going to leave for my last post of the series.) 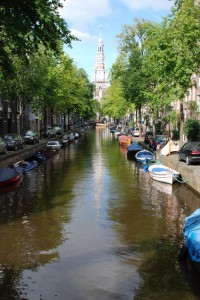 Amsterdam is also home to some unique architecture. Due to the of lack of space, houses were built quite narrow, not more than nine meters wide. Many residences were also businesses. As a result they have a pulley outside to move larger objects to upper floors.

And let’s not forget the tulips! The floating flower market or Bloemenmarkt offers an amazing array of the loveliest flowers. We brought back all kinds not just for our garden but as souvenirs, including the gorgeous Black Parrot. You simply have to ensure they have a health inspection certificate for Canada.

Then, of course, there’s the seedy underbelly. Part of a walking tour we did one morning was through the Red Light District. Among other things, this is where we saw our first instance of a public urinal for men. Women still have the decency to go indoors and often have to pay for that bit of privacy.

Overall, Cokebaby and I agree on one fact: Amsterdam is a great starter city for anyone who’s thinking of visiting Europe for the first time. Pretty much everyone speaks English (there are as many tourists are there are locals at any given time), the cost of food and drink is reasonable, and it’s small enough to get around on foot easily provided you have a good map. Friends of ours loaned us a copy of Top 10 Amsterdam which also came in quite handy. And I’m also pretty sure it would be easy to fake speaking Dutch. So many of the words are similar to English that our running joke upon seeing a new word on a sign was, “Guess what the Dutch word for [FILL IN THE BLANK] is?”

Next week: a day trip to Alkmaar for the last cheese market of the season and on then on to a charming place called Brugge (a.k.a. Bruges).