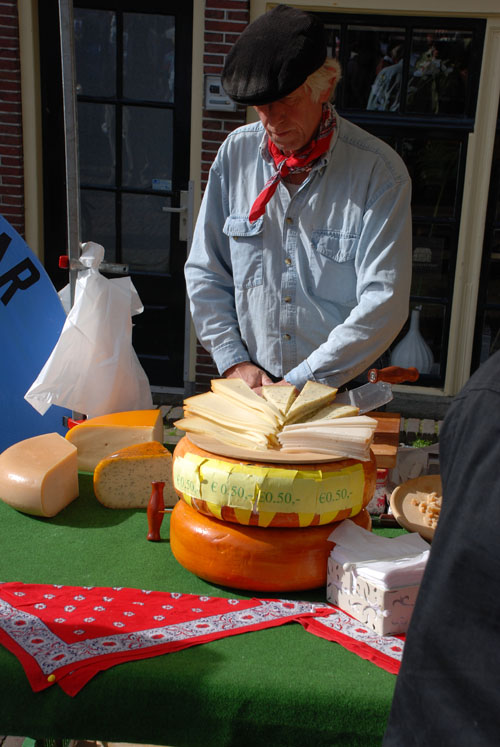 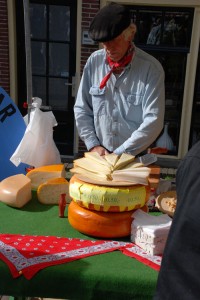 Samples were cheap and our appetites ample

For our trip to Amsterdam & Bruges, Cokebaby and I decided to purchase a pre-paid Eurail pass for the sake of convenience. We chose a flexible pass that allowed us to travel as much as we wanted during the course of five days during our time abroad. One of the day trips we took was to a quaint little medieval town called Alkmaar for the last traditional Dutch cheese market of the season.

The traditional market is one of four left in the country. In a nation with cities named Edam and Gouda you have to consider cheese to be taken pretty seriously. The little town in fact even has a cheese museum in front of which a weekly demonstration takes place. 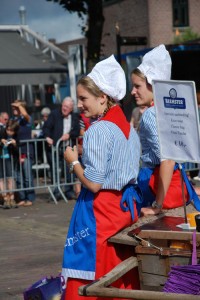 The market was filled with tourists (including us) looking for photo ops of the old-fashioned cheese porters and women in traditional clothes. Here traders and carriers weighed the cheeses that are made in the local area. It’s not actually possible to buy cheese at the market itself, which is really only a demonstration of how the merchants’ market operated historically. That said, it all takes place in front of a medieval weighing house which is surrounded by a number of food and other stalls. 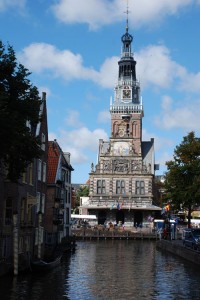 The Kaasmuseum from the canal

Once everything wraps up, the barriers are taken down and the cobblestone area is covered with patio tables from the surrounding restaurants (which are plentiful). There are also a good deal of boutiques and and other shops, ideal for window browsing.

Alkmaar made for the perfect day trip, away from the hustle and bustle of the big city of Amsterdam. The old part of town where we spent most of our time also offers scenic views of canals. We made our own picnic lunch by one overlooking the Kaasmuseum by which we had purchased a sample tray of cheeses along with bread from a local bakery. Then we chased it down with some yummy beer on a patio. The best part is that Alkmaar is a mere 40 minutes by train from Amsterdam.

Later this week: We head to Belgium and another medieval town, known as Bruges but really called Brugge.