Waiting for our train to Bruges

What can I say about this lovely city in the Flemish region of Belgium? It’s an absolutely breathtaking Medieval town that seems almost untouched by time. As we entered the old city for the first time and walked down cobblestone streets, I got a sense that every building must have had a story to tell.

Absolutely everything is scenic from the squares around just about every corner to the canals filled with white swans. On one of our tours (to be recapped next), Cokebaby and I actually also saw one of two black swans that were imported from Australia.

Even our hotel, Jan Brito, was the former residence of a baroness. We stayed in a standard “Knight” room but they offer grander suites where you can feel like a Baroness, Marquis or Duchess. The shared enclosed courtyard with a marble statue in a functioning fountain was a nice touch. If we hadn’t been so exhausted by the end of each day (and itchy from bed bug bites) we probably would have made better use of that space. As it was, we enjoyed a few photo ops there. 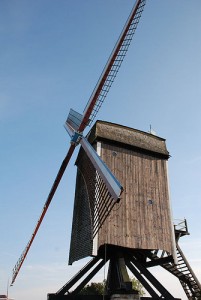 In town there are plenty of cafés and restaurants, many of which are overpriced for full sit-down meals, particularly around the main square. We were lucky enough to wander off the beaten track and find a great spot attached to a hostel (more on that in the food post next week). Throughout the town for the most part though, beer was priced at a bargain compared to anywhere else we’ve travelled. That probably has something to do with the fact that Belgium produces something close to over 8,000 different beers.

Then, of course, there were the windmills. Although modern ones dot the skyline in the new part of town, the old ones that line the canals are quite picturesque and well worth the extra footsteps to get there. 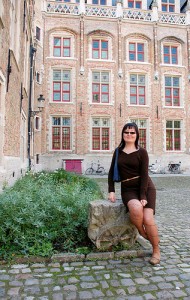 In retrospect, it looks like I'm wearing a sexy monk outfit

One of the more tranquil walks was within the confines of the Beguinage monastery where signs instructed visitors to be silent. And it’s not like the streets of Bruges are overly crowded, at least not while we were visiting, but there was something about that enforced quiet that made the walk all the more memorable. This was especially true when the bells in the church began to ring and we watched as a Benedictine nun ran across the courtyard to join her sisters for service.

One eyesore that has to be mentioned is the Concertgebouw (modern concert hall). Although it was short-listed in an international architectural competition, it’s frankly quite hideous and shows a disregard for the beauty and historic integrity of the old town.

Coming up this week: Quasimodo Tours shows the best of castles, chocolate and beer one day followed by a sobering trip through Flanders Fields. Then I’ll highlight some of the bizarre things photographed in both Amsterdam and Bruges.

Next week: The long-awaited food post. Believe me, I’ve got some yummy things to talk about.