During our stay in Belgium, Cokebaby and I went on two outings with Quasimodo Tours which we had booked before we left Canada based on some research and recommendations. It’s an operation run by a husband and wife team. Philip was our excellent guide on both two full-day tours around the countryside. On a side note, he explained that Bruges [brewje] is the French pronunciation whereas the preferred Flemish name is Brugge [brugg-ah].

Our first tour was called the Triple Treat, featuring medieval castles and historical Damme, interwoven with a chocolatier, a Belgian waffle and beer tasting. It was a very pleasant way to spend a day exploring what the country of Belgium is best known for. I’ll be certain to mention some of the highlights in my food post next week. 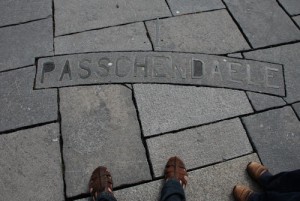 15000 Canadians died or were wounded in this battle

Our second trip on the following day was Flanders Field which included Passchendale, Hill 60 preserved battlefield, bunkers and craters, restored trenches, the town of Ypres and the Menin Gate.

You might be wondering why we’d think to take a tour of such a depressing part of history. It’s part of world history that bears remembering. I think we sometimes take for granted our liberties.

While the Belgian countryside is now lush with greenery, Philip painted a stark picture of wartime that included discussion about uses on all sides of chemicals and the living conditions of the soldiers. The trip also showed very clearly the very small amount of territory they were fighting for.

Although this part of history seems far removed for many of us, many Belgians are still dealing with physical mementoes such as undetonated bombs still beneath the surface of the fields. There have been enough of them collected to date, including chemical ones, to keep a special bomb squad safely disposing of them for the next 65 years.

In fact, it’s called the iron harvest. Many farmers are still seeing remnants of the war and apparently there are still enough bullets and ammunition to harvest for the next 100 years. It was certainly a sobering part of the trip but absolutely worth it. Philip was able to balance fact with passion for the subject matter.

The last stop on the trip was to a field hospital of literary historical significance. During the Second Battle of Ypres a Canadian artillery officer was killed on 2 May, 1915 by an exploding shell. He was a friend of the Canadian military doctor Major John McCrae who shortly afterward wrote In Flanders Fields. Philip ended the day by reading the poem and it was a fitting and emotional end to the day. 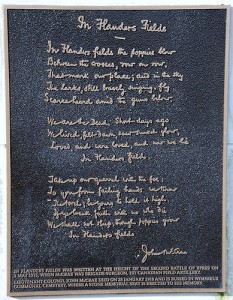 Wrapping up this week: A photographic journey of unusual sightings.

Next week: the final post of the trip, talking about foods (and drinks) of the region.