I held on to my son while mixed feelings of longing and rushing swept through my body. I didn’t want to let go, but I needed to get to work. Dropping him off at daycare is just another errand in my busy day. I took his coat off, set down his bag and was just about to hand the care of my son over to somebody else.

“Has Cameron been biting at home?”

I held onto my son tighter.

“Yes. For a while. But he only really bites me.” What I wanted to say was He never bites Dan, or other people or children. And we thought it was getting better. We go days between bites now. The problem seems to be going away! “Who is he biting?” I asked instead.

Cameron comes by his nickname Monster honestly. His baby coos resembled growls more often than not. And did I mention that he bites?

The serious biting habit started right around the end of breastfeeding which made the transition to a bottle much easier on Mommy. But when a bottle was introduced, the bites migrated from my nipples to my chest, my shoulders, my arms, my stomach, and my toes. These bites weren’t malicious and were often paired with hugs and giggles.

Slowly but surely, the biting started to subside. Our hugs weren’t resulting in bruises. I didn’t worry about coming out of playtime with an injury.

But then, the question. “Has Cameron been biting at home?” and the statement, “He’s biting everyone.”

I left with the though of another woman disciplining my child.

I just want to run home with my boy and snuggle him. I want to become his sole childcare provider again. I want to know that his poor behaviour is felt only by me, leaving the discipline to me as well. I want the world to see Cameron for who he is, the smiley faces and the tickley chin and the squeezey hugs.

I don’t want anyone to see my son as a bully.

I just want the biting to stop.

So parents, did your child go through a biting phase? How did you stop it? How long does it last? I’m feeling discouraged over here. Discouraged and bitten. 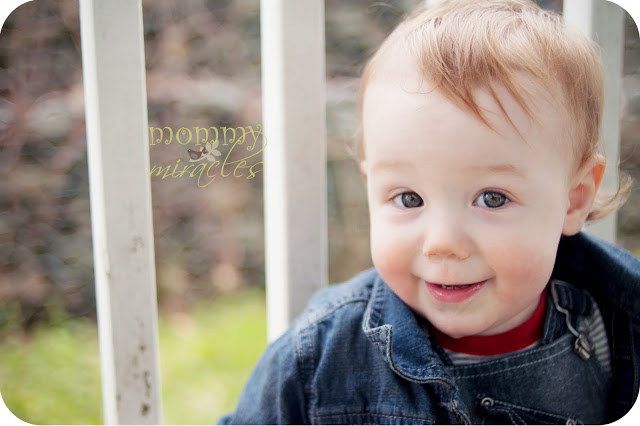 Beware of Child. He bites.
Photo taken Thursday, May 12, 2011
14 months, 6 days old
Laura (@LauraORourke) is a photographer who lives in Halifax, Nova Scotia. A wife to Dan and a mother to Cameron, she spends her free time blogging and reading. Her blog finds its home at http://miraclesofamily.blogspot.com. Her photography can be found at http://www.olalaphotography.com.