These are my go to lipsticks at the moment: Annabelle Le Gloss Sticks. I was originally sent Red Rage (a very wearable red) and fell in love with it. I used it almost every day (and still do), even for work. Then I wanted to get a few more shades but had a hard time finding them at Shoppers and Lawtons. 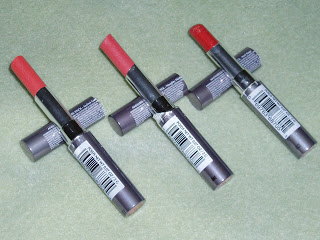 The Annabelle fairy came to the rescue and sent me 2 new shades and a backup for the one I love. So here they are, Annabelle Le Gloss Sticks, from L-R: Lychee Lust, Naughty Nectar (new) and Red Rage (well used, lol).

Don’t be scared of how intense they look on the sticks, as like I said, they are very wearable. I normally reach for a bold colour, just because my lips are pigmented, a light colour won’t show up.

Explanation for the name (Le Gloss Sticks) is they are a cross between a gloss (sheer and shine effect) and a lipstick (a solid form of light-reflecting pigments). They go on smoothly on the lips, moisturize them well and more. The “slim shine” packaging makes it very easy to tote around in your purse/ makeup bag. 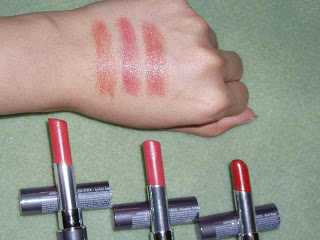 Here are the swatches in the same order. Naughty Nectar and Red Rage look totally different on the sticks but somehow swatch similar on my hand. Red Rage just has a bit more orange, but same pigmentation level and staying power.

Lychee Lust, on the other hand, is more sheer and harder to swatch. It also appears a little on the coral/brown side, very different from the stick colour. I don’t know whether it was just the photograph angle or the flash or anything.

These products stay true to how they are designed to perform. I really like the idea of the 2-in-1 effect to offer the “best of both worlds” usage. I have used half of Red Rage and won’t stop until I finish the other 2 🙂 Or maybe I don’t want to, because…

The bad news is this product is going to be discontinued this August. I don’t know about where you live, but it’s already hard to find them at a few stores I went to around here. If you are looking for a new lipstick, give these a try (before it’s too late). There are 12 shades to choose from, suggested retail price: CAD7.95.