“This All-Star Cycle is about branding,” one of the models said on ANTM this week at the start of the episode. Sigh. Yes, and that’s why I’m so over it. 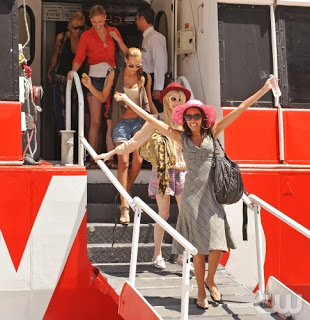 The models all traveled to Greece this week, land of feta cheese and delicious yogurt. The challenge required the girls to write a short speech for a press conference on their way to the island of Crete. They had to include Greek words, which worried dyslexic Laura.

Lisa went first – she looked like a tramp and was way too loud. Allison went next and was more subdued but used a lot of Greek words within her speech. Shannon barely used any Greek, and she came across as tense and nervous. Laura was animated, but she was so nervous and screwed up a few times. Angelea was doing well until she asked the reporters where the “bano” was. Oh my. Both Spanish and inappropriate, honey. When Miss J met the girls at their new digs for their critiques, I was glad he called Lisa out on her skimpy clothing. Apparently Lisa watches the news and has thus learned that politicians like minimal clothing. Honestly, I’ve run out of words to describe how much I dislike this girl. Miss J announced Allison as the winner, and that’s who I would’ve chosen as well.

This week the girls got to sit down with a designer to create a gown for the runway show with the theme “immortal goddess”. My favorite part of the collaborations was when the designer told Lisa he didn’t want to use Christmas lights like she suggested because it would look tacky. 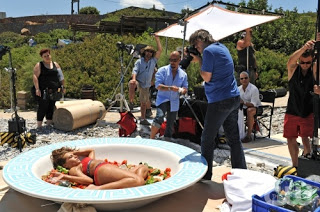 REALLY? The girls were posing in underwear in a giant bowl of Greek salad for the photo shoot this week? What the hell? Seriously y’all, it was really dumb.

Laura woke up the day of the shoot incredibly sick, but she tried to suck it up and perform. Allison faced a challenge too, because she has something called “vampire vision” (is that a thing? I couldn’t find a good definition on Google…as in, I didn’t see a Wikipedia page within the first five results) and the sunlight hurts her eyes. It makes her eyes tear like crazy, which really isn’t her fault. I hoped it wouldn’t hurt her overall in the competition.

The shoot also posed a problem for Shannon, who will wear the skimpiest of bikinis but not a cute, not at all risque lingerie set. The hypocrisy in Shannon’s standards drives me crazy. Jay was obviously frustrated too, and he called it on the nose – it’s just word games and semantics. Shannon couldn’t even eloquently articulate the reasons behind her beliefs to Jay.

I’m just saying. It doesn’t. Anyway, how did the photos turn out? Let’s see.

Allison: Allison’s eyes were closed in her shot, but it was still pretty. Not her best work, but considering how much she struggled I think she got a good enough shot.
Angelea: She looks nice, I’m just too distracted by the giant chunks of feta cheese. So dumb.
Lisa: Ugh. Once again, it’s a decent shot. Why can’t she screw up and get eliminated? Jeez!
Shannon: Shannon got called out on how much of her argument is semantics, because her standards are based on words and not how much of her body she’s comfortable revealing.
Dominique: I really loved this photo, even though the salad is still stupid. She looked gorgeous – best photo for sure.
Laura: Hmm. She didn’t look great. I love Laura, but this was one of her weakest shots.

I definitely thought Dominique had the best photo, and while I thought Laura probably had the weakest shot I thought Shannon deserved to be eliminated instead. Not only did Shannon refuse to do the shoot, but if you look at Shannon’s overall work vs. Laura’s overall work, then I think Laura comes out on top.

Dominique was called first, which was well deserved. Next were Allison (yay!), Angelea and Lisa. Predictably, that left Laura and Shannon in the bottom two. Laura got to stay, and any other decision would have enraged me. Shannon just didn’t have a strong enough portfolio to warrant getting to stay. Nigel was spot on in pointing out that she’s never had best photo or won a challenge – and she better not blame getting eliminated on her morals, because it was made clear that it was based on a weak overall performance.

What did you guys think of the episode? Do Shannon’s standards make sense? Was the salad as dumb as I thought it was? And are you also kind of looking forward to next week’s episode based on that kinda crazy preview? Let me know!

ANTM All-Stars: It's All Greek To Me
https://haligonia.ca/antm-all-stars-it-s-all-greek-to-me-48366/